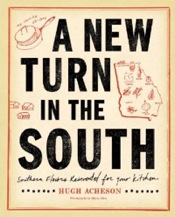 Bill Addison, Food editor and dining critic for Atlanta Magazine, has reviewed chef Hugh Acheson's new cookbook: A New Turn in the South. Addison calls the book "a pleasure to read and cook from" and goes on to say: "I doubt that Acheson specifically aimed to translate any specific “movement” of cooking for the home kitchen when writing the book. He was just doing his thing—but the book makes it clear that, when he opened Five and Ten in Athens in 2000, he began developing a style that matches Atlanta’s Dixie roots with its global community and outlook." [Atlanta Magazine]