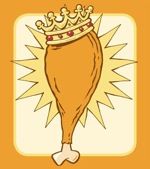 Foodie Buddha reports he's learned from a source that LeRoy's Fried Chicken may not be long for this world. Buddha says owners Clay Harper and Mike Nelson may shutter the relatively new fried chicken shack because "the fried chicken that has never been good, the food stand is struggling to draw crowds." He also says the duo may replace LeRoy's with "a second Ringside Franks & Shakes, their recently opened Roswell Road hot dog stand." Eater Atlanta has reached out to Harper and Nelson for a comment. Stay tuned to see what they say. [Foodie Buddha]