Share All sharing options for: Mounir Barhoumi Of La Fourchette

Welcome to One Year In, a feature in which Eater sits down for a chat with the chefs and owners of restaurants celebrating their one year anniversary. 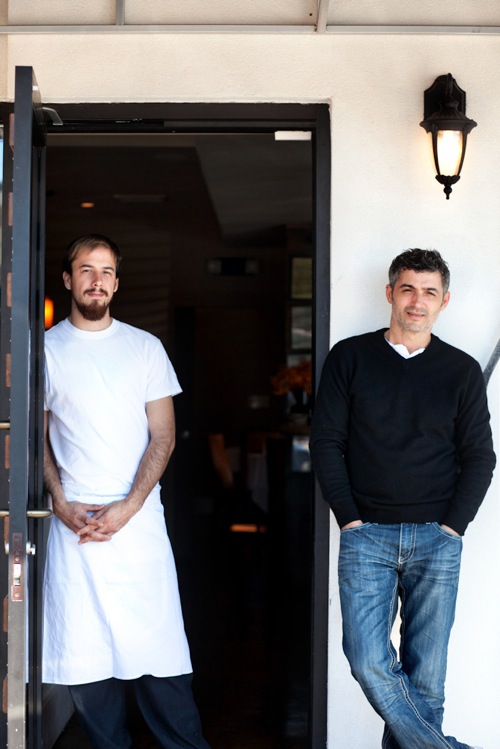 In September 2010, Mounir Barhoumi opened La Fourchette on a busy stretch of Piedmont Road. A native of Tunisia, Barhoumi moved to Aix en Provence, France when he was 17. He went to work in his brother's restaurant and fell in love with French cuisine and the food from neighboring countries. After moving to Atlanta via Kansas, he immersed himself in the Atlanta culinary scene as a manager at restaurants such as Anis, Amuse, The Tasting Room and JCT Kitchen. When it came time to open his own restaurant, Barhoumi sought out the best talent he could and hired chef Jeff Wall, who trained at the now shuttered JOËL. La Fourchette is a family affair, which Barhoumi always envisioned it would be. His wife, Linda, and their two daughters (aged 12 and 14) help out around the restaurant. As if one restaurant isn't enough, a couple of weeks ago, the couple recently opened a Naples-inspired pizzeria called Tartufo next door to La Fourchette. We caught up with Barhoumi to discuss La Fourchette's first year.

How did opening go?
It went very well. I don't believe in advertising, but I do believe in word of mouth. The first month was quiet because nobody knew we were here. But, as soon as they heard my name and that I was the owner, people came. Like I said, I've been in Atlanta since 1991 and know a lot of the foodie people from when I waited tables and managed. I have always believe in engaging the customers. The second month, we jumped. From 10 covers on a Saturday, we went to 150-180 covers in a month. People thought I was crazy considering the economy, but I always believe in myself and, of course, the chef. I tried his food and it was unbelievable. I interviewed five chefs and I picked the youngest one out of all of them. He's very passionate about food.

What is the creative process like between the two of you?
I am very involved with the menu. I don't do the cooking, but very much the ingredients and the flavor. We consult between each other. When we first opened, there were some items I wanted on the menu like loup de mer because it is a great fish. It is a light and flaky fish that you don't see a lot of in Atlanta. And, I also wanted a fresh pasta on the menu - the pasta with the jumbo lump crab meat. It is made in house. Everything - the pastries and the pastas - are made in house. I am a very flexible person. He has never proved me wrong. He understands where I come from. When I travel, I write down recipes, try it at home, and tell him my ideas. He will normally implement it and make little changes. We never disagree. He is good.

What was the review process? Were you pleased with the response?
I am very happy. Just to give you an idea, The Atlanta Journal-Constitution gave us a great review. Knife & Fork gave us a great review. Creative Loafing: so, so. But, to be honest, I really couldn't care less. My customers were upset what she wrote about us, but I don't read Creative Loafing personally. But a lot of my customers wondered what she was talking about it. Was she even here? Did she go to another You've got to take the good with the bad. But it did not hurt me.

Do you feel like the majority of critics understand the intent behind La Fourchette?
Absolutely. I think they did. It's a mixture. I picked the regions that I love the best: France, Spain and Italy with a little from my country - Tunisia. We hope to put more dishes from Tunisia on the menu like the Tunisian beignet

How's business these days?
It's good. We had a bad September. July and August are normally the worst months, but I had a good July and August. September was a little bit slow, but October is picking up.

Looking back over the past year, what would you do differently?
I wouldn't change anything. It is working very well. I have repeat customers that come two, three times a week. The only thing I wish is that we could have a patio outside because that is very European. I am working on one next door (at Tartufo), but my parking is very tight. It might be a challenge, but, so far, I have the valets. My neighbors are supportive and let me use their parking. I am happy with the food, my chef, my staff. We can always improve of course, but no regrets.

How is this restaurant different from any other you've been a part of?
I don't like to talk badly about other places. To be honest, when I go to apply for a job as a manager, if I don't like the food, I won't apply. I treat other people restaurants like they are my own. You can ask other owners that I have worked for. Most of the places I have worked for have been successful and the reason why, I think, is because I will pick good restaurants. I remember one year I worked at a restaurant where the food was terrible. To be honest, I only stayed for two weeks. My customers kept calling asking where I was working and I said: "I am not telling you. I don't like the food or the establishment. I am leaving soon." And they like that honesty. I just couldn't work there. I need to be proud of where I work.

What made you decide to open Tartfuo?
Buckhead needs a pizza place. It's always been one of my dreams since I was a kid. When I was 16, I went to visit my uncle in a town outside of Naples, Italy and he put me to work at his friend's pizza place. I fell in love in pizza. For me, working with the dough is therapy. The opportunity came this year. I grabbed the location next to me. My customers love it. I don't like to brag, but people say it's good. So, it's working for me.

· All previous editions of One Year In [-EATL-]