Share All sharing options for: Taria Camerino Of Sugar-Coated Radical 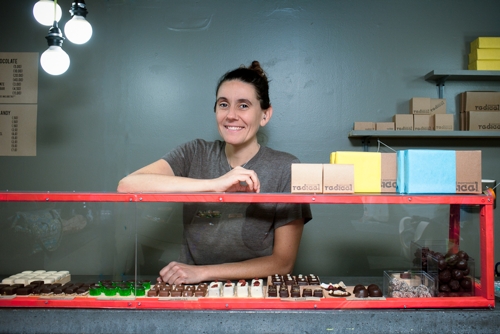 In December 2010, Taria Camerino opened Sugar-Coated Radical in a tiny space on an empty street in Poncey-Highlands. Originally from Gainesville, Florida, Camerino's 18 years as a pastry chef have taken her to restaurants across Florida and into Atlanta. She's worked for such local giants as Alon's, Holeman & Finch, Restaurant Eugene, and Highland Bakery, as well as much-loved spots like Dish and Top Flr. She briefly ran her own shop in 2006, Sweet Revolution in Little Five Points, but its partners limited her scope and the business ran its course. But with the opening of Sugar-Coated Radical, Camerino's creative spirit and ethical commitment are able to shine through her own venture. We recently talked with Taria about her journey to Sugar-Coated Radical and its first year selling fair trade chocolates and other confections.

What did your years as a restaurant pastry chef teach you now that you're running your own shop? Must feel good to have total creative freedom.
Adaptability. I often chose start-up restaurants. I'm a good start-up person. You work with what you've got [because] start-up restaurants don't have a lot of resources. Sometimes you've even got a broken oven. I worked in some places where I could do whatever I wanted. In some I had to cater to a certain customer base. If anything, I have more ethical freedom now. I can choose the better ingredient [fair trade chocolate and sugar] and figure out how to make it work. I didn't have that as much before. Here we can do whatever we want. Somehow the market finds us.

How long had you known that you wanted to open your own place and how's Sugar-Coated Radical different than your first (2006's Sweet Revolution)?
Certainly [had thought about it] when I was younger. [But] Sweet Revolution was an accident. We didn't mean to open a shop. We had just moved to Atlanta, had two small kids, and I was trying to find the job I really wanted. I can generally find a job really quick, but wanted to find a restaurant that I liked. We went to eat pizza at Savage and saw a part-time job at a candy shop next door. Spoke to two guys consulting for this business. They said, "We really need your help." I told them, "I can save your business, but not for $10/hr." I wasn't planning on buying a business, but went in and bought it turn-key. Wound up spinning my wheels because, with the partners involved, I couldn't make the changes to improve the business. We had to close. I started working in the industry [again]. When I was at H&F [Bread Co.] I had already fully moved into chocolate. Worked for them to get their pastry program started and parted ways eager to get back to chocolate. I wanted more creative and ethical freedom. Opened Sugar-Coated Radical within three months.

When did you officially open Sugar-Coated Radical? How did opening go?
December 8, 2010. It was fine—nobody came in! They didn't know we existed. I don't think they knew we existed for a couple of weeks. I posted on Facebook that we could really use some support. [Local resident] Angel, also called "the mayor," saw the post. He didn't know who we were but saw we were on the Beltline. He'd bring people every weekend, telling them, "you gotta try this place." Christmas season, we got nothin'. Valentine's was busier. Since we do everything by hand, it was intense. Took people a long time to catch on.

What's your business collaboration like with your partner, Ashley Henson?
Ashley's a pretty big influence for why I even started Sugar-Coated Radical. She's a visual, conceptual artist. [I questioned] the whole scene—what tangible effect does art have on most people? She's [Ashley's] always felt that way, "How can it more impact the world at large?" Slowly we've both evolved. Sugar-Coated Radical has a strong art sense to it. It's in everything that we do. Ashley does our design work and screen printing. As the business moves along she'll be able to manifest that even more. [We've talked about] art openings—how come nobody cares about what they're eating? It's a huge component to our lives. We eat every single day. I want to do things in galleries. We'll be doing Day Job at the Contemporary [Atlanta Contemporary Art Center] on January 15. It's about how artists make a living and influence each other. Ashley is a huge piece to that puzzle for us.

How do you source your fair trade suppliers? Do you think the masses are starting to get why fair trade is so important?
I do a lot of online searching and then connecting with the companies. At large, I think society is catching on. But honestly it's not really doable for most people right now. Until the big companies change, it's not going to change. Companies are buying on a huge scale. If everyone in the community started paying attention to their purchases...If people know, generally they want to do the right thing.

You've mentioned in past interviews roasting and grinding your own cacao beans one day—is that something you'd still like to do?
Definitely want to. But we want to grow it too. We want bean to bar and we want our own farmland. This summer we're going to Nicaragua to look at a place called the Green Forest Farm. The guy that's selling it wants to keep it really green. Doesn't want big business. I don't have the money at all—goal is to convince him that we will do the right thing and we'll work it out.

You've also talked about the psychological effect of chocolate—how much does that play a part in your creative process?
A tremendous part. Because I understand flavor and emotional responses, it's really great for us to be able to evoke that kind of response. I didn't really know why I chose this field. For a long time I didn't understand. Over the years I've slowly started to figure it out. Though I love what I do, I could do anything that positively influenced the world. When I was a kid, we had a club. I would find jobs for us so we could build a clubhouse, a place that was ours and safe. I was never the president. I was the treasurer, cause I knew it was the money that would get you somewhere. Every weekend they [the kids] would take the money to buy candy. I would say, "We're never going to get the clubhouse if we keep throwing the money away." I realized fairly early, the power of sugar is huge. People love sweets. I can have an effect on people. I can make them feel good and do good at the same time. That's powerful. Chocolate is really powerful in that. I can use it communicate a message of paying attention to their purchases. I can use it for good.

What's the weirdest response you've ever gotten from a customer who's not used to anything outside the regular chocolate box?
One lady came in and said, "I hear you have caramels." She was on the phone with her friend, who told her to come in cause she'd tried spicy caramel:

She walked out the door. So we sometimes get people surprised. What's awesome is when we have samples out and they don't know what it is. They say, "What was that?" and they wind up liking it. All samples [we have] out are going to be new and different. They'll taste it and be like, "Oh my God, that's good," generally surprised.

When did you relocate to the new space and how is it treating you?
September 1, 2011. We get more traffic. Having our own kitchen has transformed our experience and life. It's helped us with doing outside events. The neighborhood has been wonderfully supportive. Everyone's watching.

You and Ashley have done community events like art installations and "Bakery Sundays"—how important is it that Sugar-Coated Radical be a part of its community and did that play a part in your decision to relocate?
We always wanted this space [from the start]. Someone signed a lease before we had a chance. We had to open, though. So we went ahead and opened [in our original location] and rented a kitchen. I said, "I don't care where we are but we need to make genius happen. The world needs it." I would keep driving by this space, though, until it was available. In August I told the landlord that nothing would work here until we were in it. They thought we were crazy, but now they believe it.

Being a part of the community is the only way. Bakery Sunday is a community event. It's not about the business aspect of it. People love pastry. They love bread. There's a grounding effect to it. To offer that to the community is really important to me. The response is amazing. People who come are so happy. Every Sunday is a party. Art installations we do because we have a lot to say politically, as well, especially about the chocolate industry. It's good to be in the artist community because they're generally revolutionary types. They understand what we're doing.

What have you learned this year that you'll take into the next? What's next?
I've learned to create a more solid foundation so that we can move into the next year with a little less stress. In January I plan on refocusing on our foundation as a business. We'll focus heavily on growing chocolate sales. Creating a steady revenue stream.

Collaborations. Condesa has asked us to take over their food. And they have chairs [SCR is tiny].

· All previous editions of One Year In [-EATL-]