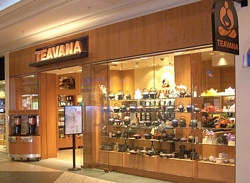 Atlanta-based specialty tea retailer Teavana is planning to open its first Canadian store, according to The Atlanta Journal-Constitution. The company, which went public earlier this year, has added 50 locations in the first nine months of its fiscal year and plans to add another 60 in 2012. Currently at 196 stores, Teavana's third quarter profits are up at $936,000, a 175 percent increase over the third quarter of 2010. Canadians will be able to get their tea on in the fourth quarter. [AJC]