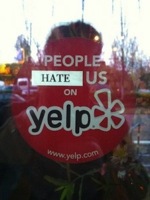 This week, The Atlanta Journal-Constitution's Jon Watson examines whether or not Yelp is "fair and balanced." He was prompted to write the article after reading Josh Josh Ozersky’s column in Time Magazine, which bizarrely referred to the controversial site as "generally accurate and unbiased." Watson says: "I know more than one writer that began as a Yelper, learned that they enjoyed reviewing restaurants, and have moved on to writing either a well-respected blog or for a paid position with a legitimate publication. But for every one of those, it feels like there are five reviews that aren’t worth the time it takes to read them." [AJC]