A Punk, A Picnic, And Some Pork

Share All sharing options for: A Punk, A Picnic, And Some Pork 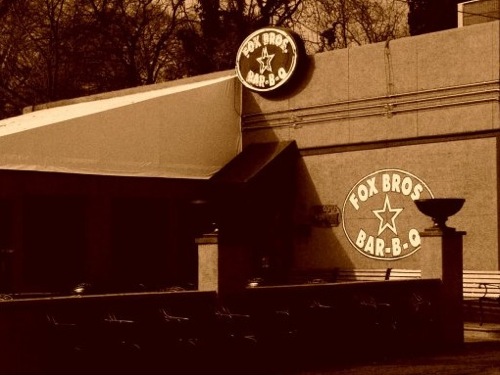 The patio and front of Fox Bros Bar-B-Q [Photo: Facebook]

Today's Shit People Steal comes from the fine folks over at Fox Bros. Bar-B-Q. Seems the popular restaurant has had its share of fuckery. People somehow steal signs off the wall that are screwed in. Salt and pepper shakers go missing. However, if it were not for the security cameras, this gem would have gone unsolved and the staff surely would have missed out on some prime entertainment that almost borders on Tales Of The Weird.

One night around 3a.m., the cameras caught a young "gutter punk" kid roll up on his bike with his backpack in tow. The man-boy may have been a bit under the influence of something because he started stacking chairs from the patio as if he was going to take them somewhere, but quickly gave up once he seemingly realized he had no way to cart them off the property.

He was hell bent on taking something - anything - so he broke into one of the smokers to snatch some meat. The only problem? The meat is around 170 degrees and he just dropping a bunch of prime cuts - damn him- and ended up making more a mess than anything.

Still, the next morning, the brothers Fox found a bunch of the patio chairs configured in the parking lot surrounded by a mess of empty beer bottles and pork scraps. Looks like the punk got himself a free meal and shared it with his friends.

Want to submit your theft stories? You know you do. Send 'em on over to atlanta@eater.com

Yes, Empire State South Is on the Market, but It’s Not Closing