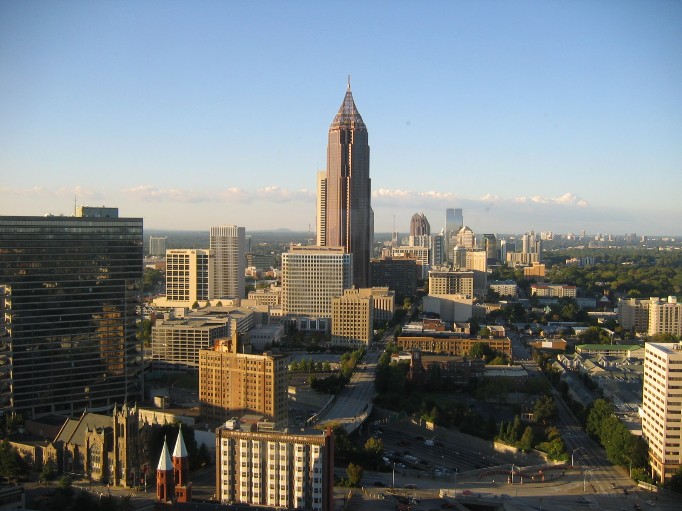 [The Bank of America building looms over Midtown and downtown, photo via anefian.com.]

Atlanta's Tallest Building in Trouble—The tallest building in the Western hemisphere, outside of New York or Chicago (and arguably the most recognizable in Atlanta's skyline), is close to foreclosure. Bentley Forbes paid a lot of money for Bank of America Plaza back in 2006; but with a current occupancy rate of 79%, let's just say the numbers aren't adding up anymore. Will the building's original developer Cousins Properties come back into the fold?

Progress on the Ft. McPherson Redevelopment Project—did you know there's a nearly 500-acre defunct Army base in southwest Atlanta, served by MARTA? Did you know that base has a lovely collection of both historic and modern buildings that are going to be re-purposed; and the place could become an amazing new district of residential and commercial development anchored by a state-funded science and technology park? Learn more here with a quick follow-up here.

What Would You Do With Arguably the Best Piece of Undeveloped Land in Atlanta?—pretend you're a real estate developer with a few hundred million dollars to put toward a project. What would you build on the property that sits directly across from an architectural gem of a fine art palace on Atlanta's signature street in Atlanta's hottest submarket? One of this week's Please Build Here features recalls the Great Recession-plagued saga of 1301 Peachtree Road NE, the nearly $20 million piece of land now choked by weeds and submerged under 5 years of rainwater.

House of the Week—The internets were lit up this week with word that Atlanta Braves hero (we're just going to forget that time he spent in a Red Sox uniform) John Smoltz is selling his huge Milton estate. If you've got $7 million and change and are looking for 18,000 square feet o' house and your own 18 hole golf course, this may be right up your alley.