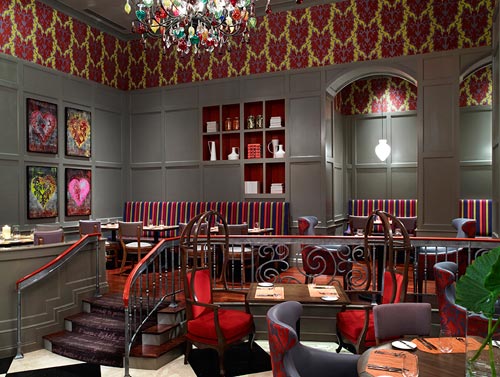 In October 2011, Art Smith of Top Chef and Top Chef Masters fame, brought his award-winning cooking to Atlanta. He already had Table Fifty-Two in Chicago, Art & Soul in Washington, D.C., and Lyfe in California. He could've replicated any of them, but Smith likes to bring a sense of place with his food; thus the creation of Southern Art and Bourbon Bar, which features a full-on ham bar, in addition to gourmet fried chicken, shrimp and grits, and other regional offerings. Though Smith lives in Chicago, he flies in at least once a month to check in on the restaurant and to work with the man who keeps things running smoothly, executive chef Anthony Gray. Eater checked in with Smith to see how year one went.

How did opening go?
We didn't have a grand opening—just kind of opened the doors and it seemed to go well. Usually hotel food is described as 'continental,' which basically equates to 'food that doesn't offend.' Introducing southern food to a hotel was a risk, but our ham bar and bourbon bar became stellar stars of the property. We do a tremendous amount of catering.

What is the creative process like between you and Anthony Gray? How did you split opening responsibilities and how does it work now?
The Bourbon Bar was my inspiration. I hated the cognac bar that was there before. I wrote the preliminary menus based on recipes I like and allowed him and [mixologist] Arianne [Fielder] to add creative elements. The chicken and dumpling soup is my mom's; Anthony added the pate and homemade charcuterie. Arianne expanded on the cocktail list.

How do you think Anthony leaving Southern Art will affect the restaurant?
He's made a tremendous contribution to the restaurant, but he's a proud new father and family comes first. He has my blessing [in leaving]. He's leaving behind two great executive sous chefs and I brought in a chef de cuisine, who'll run the place until we find the right chef. The restaurant will go on the same; I'm not changing the menu until we get a new chef.

What was the review process? Were you pleased with the response?
John Kessler was very respectful. We took his comments [to heart] and tweaked the restaurant based on them. We were named best hotel restaurant—I'm very flattered.

How's business these days?
We're busy as a bee. I love being a part of the Atlanta community. They cheer me on and embrace me. We'll stay here as long as they want.

Looking back over the past year, what would you do differently?
I wouldn't do much different—maybe just do a big ham bar and bourbon bar, plus desserts. I believe the future [of the industry] is casual, so I'd emphasize the bar and do a less structured menu with more 'plates' and healthy items and less of a focus on appetizers and entrees.

How is this restaurant different from any other you've been a part of?
Atlanta, to me, is the Hollywood or the New York City of the South. Every major movie star stays at the InterContinental here when filming in the city. I've seen many of them at the restaurant.

What else do you have in the works?
I'm doing some videos for Twitter and YouTube, cooking and raising money for charities. I have a trip to Israel and Jordan planned for this spring, to cook with kids there. I'm going wild truffle hunting in Italy. Plus, there's the option for more restaurants in San Antonio and L.A., but we'll see. I'd need more chefs and the proper infrastructure. People aren't tired of my Southern cooking at hotels just yet.