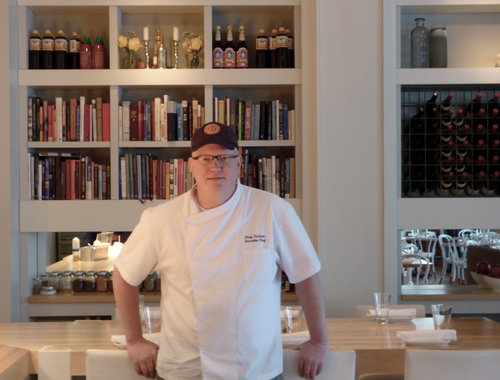 Doug Turbush is the chef and owner of Seed Kitchen & Bar in Marietta. The restaurant, which celebrates its first anniversary this month, has been on the map since it opened as one of the top places to dine outside of the perimeter and has made quite a name for itself in town as well. Here, Turbush, previously executive chef at both Bluepointe and Nava of Buckhead Life Restaurant Group, talks about year one at Seed, what's different about being in the suburbs, and his plans for the future.

How was the first year? How was opening day?
The first year was pretty incredible. It was a lot more than we expected. Opening day was a lot busier than I expected. It was extraordinarily stressful, but in the end, it was a hell of a good night.

Were there any big surprises?
Opening night, my general manager had to take a guy out— that was interesting. We found out later that the guy was probably on something, but he came in and was drinking and tried to take someone else's drink, and then he took a swing at the manager, so [the manager] took him outside. It was all adrenaline.

You guys helped change the scene outside the perimeter. Did you expect to have this kind of success in the suburbs?
Well, we set our sites beyond just being the best restaurant in Marietta. We wanted to be a real contender for Atlanta, and I think we've somewhat achieved that. We're still working out the kinks and figuring out the market, but the market out here has been overwhelming as far as the actual clientele because they're extremely loyal and keep going here three or four times a week. I've never seen that before in restaurants I've worked at before. In Buckhead. There, you know, you might get the locals in on Sundays, but this has been kind of awesome, to have a neighborhood spot that people love to frequent.

Why did you choose Marietta?
I live about five minutes away from here and I've lived here for 12 years, and I've never understood why this market didn't have or didn't support a great restaurant. And I was tired of going to chains. Honestly, the day I saw the Whole Foods sign go up [in the shopping center Seed is now in], I called the number of the billboard and started talking with the landlord. They do a ton of market research, so I didn't have to do as much.

Do a lot of people come in from the city?
I get a lot of people from in town, yeah. The biggest draw from in town, I think, is the people who live up here. Now, after having to always go into Atlanta to have dinner, they have a place here to bring their friends. It makes them proud that they can show off their city.

Do you have any plans for the future?
We're looking at a couple options right now. We're looking at expansion, get in another restaurant. I'm going to stay in East Cobb for a while. I can't really disclose much, but [it will open] in the next year.

How's business these days?
Holidays are big, you know. Like I said, we're still trying to figure out the market— I thought the summer was going to be dead in the suburbs, but it turned out to be three of our best months. We can't ask for anything more.

Looking back, is there anything you would have done differently?
Well, I'm pleased with the way things are going. I think something we're going to do differently is build up a bigger brunch crowd. It was one of the things I kind of dreaded, because I'd never worked brunch, but in the next month or so, we're going to unveil a whole new brunch menu and open earlier to get people in here.

How is Seed different from any other restaurant that you've been a part of?
Number one, I have a hand-picked, awesome general manager who I chose to lead this restaurant, and he's done a phenomenal job with service to the point where it was biggest worry going in and now it's my least. I think we have some of the top service in the city up here, and that's just been a blessing because I really like to be able to focus 100 percent out of 100 on the culinary. Obviously, I've got a say on what goes on in the front of the house, but we've really got it managed to the point where it's awesome. Our staff is awesome.

What's different from Buckhead is that we don't have the talent pool up here that we have down there, so we've kind of had to start over with everyone. We've had to build this up from nothing into a restaurant that can perform a three hundred cover Saturday. That whole process of training and teaching people— in Buckhead, you could hire someone off the street and they'd have ten years of experience and could just walk in and do it— but it's been kind of enriching to do it.

How did you pick the name?
I wanted a name that showed our commitment to using local growers, and that's what we do. All our produce is bought through the turnip truck which goes around to twelve local farms. We use that as much as we can. It's been harder than I thought to get that kind of product up here, but it's awesome to have those guys.