This is The Gatekeepers, in which Eater roams the city meeting the fine ladies and gentlemen that stand between you and some of Atlanta's hottest tables. 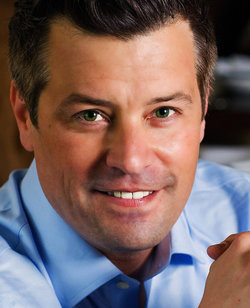 Michael Erickson loves his job. He's the director of marketing for the seven Fifth Group restaurants, Ecco, La Tavola, Lure, the Original El Taco, Alma Cocina, and the two South City Kitchen locations, which means that he gets customers in the door, reaches out to them in real time when they have compliments or complaints, and thanks them for their feedback after they've eaten. The twist, of course, is that he does it all from behind a computer screen. Here, Erickson talks with Eater about how to keep guests happy and how Twitter changed everything.

You're not a gatekeeper in the traditional sense, but in other ways, you are the ultimate gatekeeper.
Thank you! I think in a lot of ways I'm a gatekeeper of information. I manage the social media accounts, and people come to me to find out when a certain Fifth Group restaurant opens for the day or whether or not they can get a table for a weekend dinner.

Okay, so it's 8 p.m. on a Saturday. The waits at each of the restaurants obviously varies, but how do you keep the times under control?
We try not to have anybody wait. Dining isn't an exact science, but OpenTable helps a lot. Sometimes I have people contact me saying that they can't make a reservation online because the times are blocked off, and there's a reason for that. We don't want to keep people waiting.

Is there anything I can do to make the wait shorter?
If someone reaches out to me over Twitter, there may be a chance that I can do something to get them in, but it doesn't happen often.

You sometimes post pictures of celebrities or VIPs who come into the restaurants, but only after they've left. Do you interact with them before as well?
Not often— and I'd never announce that somebody famous was dining with us until after the party had left. Once, I did have a Real Housewife contact me and say that she wanted to make a reservation at one of the restaurants. That was fun. I'm not saying which Housewife, but she wasn't from Atlanta.

Have people ever tried to slip you cash or gifts to speed things along?
No, I think the fourth wall of being behind a computer makes that difficult. It'd be really hard for someone to Tweet at me and try to offer me money!

I will say, though, that if you send me a message letting me know that it's your birthday or an anniversary, I do my best to tell the restaurants so that they can send out a free appetizer, something like that. It doesn't happen every time, of course, but one of the perks of my job is being able to do little things like that for people who interact with me.

Tell us about your favorite customers.
All of my favorite customers are the ones who interact with me online. I love when people Tweet at me or post pictures of their restaurant experiences on Instagram or Facebook. I can repost those pictures so other people can see what a great dining experience they had.

Social media can really help restaurants in that way— if someone has a good time, they talk about it immediately, but the same goes for negative feedback. What do you do in those situations?
I try to do the same thing that I do for positive feedback. I respond quickly and attempt to find out exactly what the problem is and why it was caused, and then I do my best to resolve it. I've found that people just want to be heard, and often, customers who initially have complaints end up becoming regulars.

How has social media changed the way restaurants open since you started at Fifth Group?
I started in 2006, right after Ecco and South City Kitchen opened. Twitter definitely changed things. Just recently, all our restaurants got their own Twitter handles, although I haven't handed them over quite yet! When I started, news about restaurant openings got around through word of mouth and ads in papers, and Fifth Group is small. We don't have the budget to take out five-page ads. If you can, that's great, but I just can't do that, so I love that I'm able to spread knowledge this way.

People are curious, and we get to act on and indulge that curiosity. But that also means that we can't rely on a set schedule or timeline— people want to know when a restaurant will open and what it's going to be serving, and we have to give them that information when they want it. If I go to a menu tasting, I can Tweet out a sneak peak and let people into the process that way. With openings, I can say "Spring," and then two weeks later say "April," and then later announce the day, so that there's constantly a flow of information. We have to keep it coming, and that keeps us smart.

Do you have a favorite Fifth Group restaurant?
I do, but I'm not telling! I love Little Alley Steak, Salt Factory, and INC Street Food in downtown Roswell though.

What's your favorite table?
At South City Kitchen, I like any table upstairs that's over looking the bar. My favorite table at Ecco is 61, which is in the back corner. I love the patios at Lure and at La Tavola, both of which are heated now that it's winter! And really, all of the restaurants' bars are great.

At the end of the day, what's the one Gatekeeper tool you need to get the job done?
I knew you were going to ask this, and it's definitely my trusty Droid. I also love my computer setup with two screens, so that I can keep Twitter running while I work.