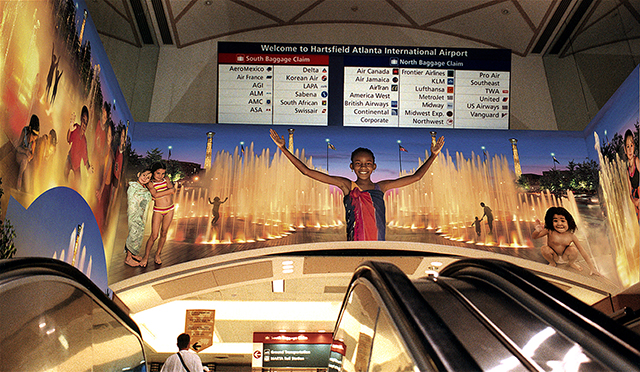 "The Spirit of Atlanta" at Hartsfield International Airport, by Deborah Wian Whitehouse. [Image courtesy of the artist.]

Atlanta—Um, good news(?) Atlanta doesn't totally fail at racial equality. Various think tanks have now had time to crunch the raw data from the 2010 census, and one analyzed the state of racial equality in U.S. cities. Bottom line on Atlanta: it's better to be African American than hispanic.

Westside—The mad dash to create an apartment bubble—er, slake the Atlanta area's incredible thirst for new multifamily rental housing—continues, this time on the Westside. A re-zoning request on a parcel down the street from the Westside Urban Market, flagged by our friends at Creative Loafing, made us aware.

Midtown—We took a hazy, techni-colored stroll down memory lane to a time when Midtown was for hippies, not yuppies (in fairness, today Midtown has offerings for both neo-hippies and emo-yuppies). It was all flower children and fascinated onlookers there for a while, then the hard drugs came. And the seventies weren't any prettier in Midtown Atlanta than the rest of the world.

House of the Week—Judging by the winter that never really came to Atlanta, this summer's going to be a scorcher. Are you ready? Perhaps you'd be moreso if you purchased this house in North Buckhead with a killer outdoor space built around a pool. $699,000 is the ask.