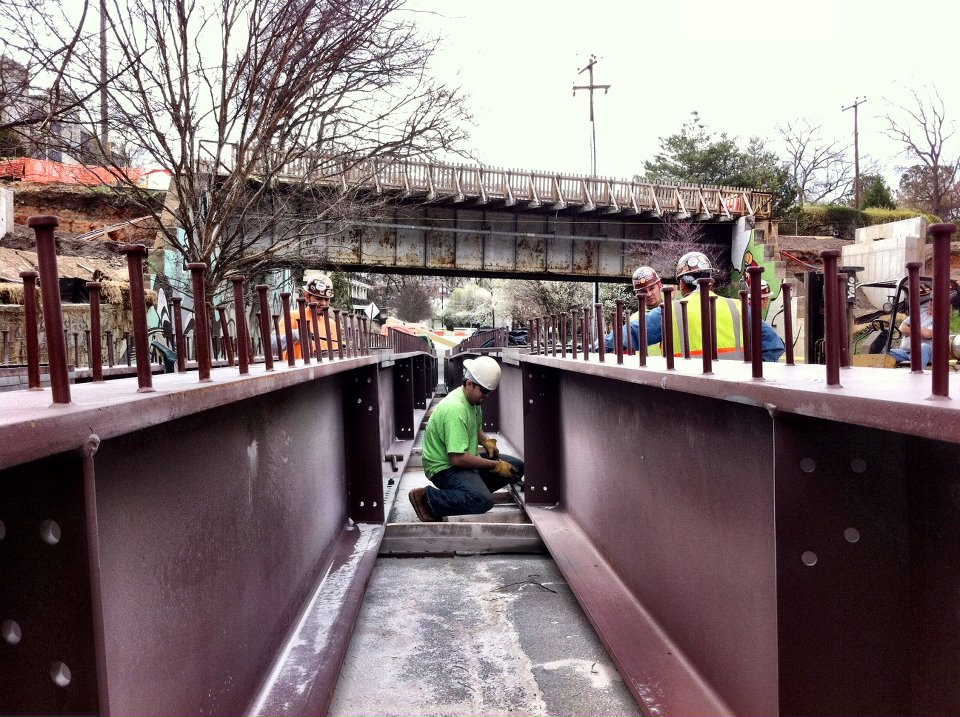 [Workers and the big steel they laid down this week on the BeltLine. Photo via Atlanta BeltLine Facebook page.]

Old Fourth Ward— though its running a bit behind (okay, a few months), the Eastside Trail segment of The BeltLine made some huge moves this week. More specifically, a crane moved some huge steel beams into place as the bridge over Ralph McGill Boulevard is upgraded to accommodate the first major section of The BeltLine's pedestrian/bike path, which now looks to open late summer. Never heard of The BeltLine? We'll get you up to speed.

Everywhere— if you live in the City of Atlanta and either have kids or have neighbors that have them, it's likely you've heard of this school re-districting thing (and probably in rather excitable tones for hours on end). Anyway, while folks' understandable concern for their childrens' education is getting all of the headlines, what about all of the schools they want to close down? Atlanta has a pretty lackluster record of re-purposing perfectly good school buildings, with a couple of notable exceptions.

Brookhaven— the great apartment building boom seems only to be picking up steam (can steam make a bubble, or is it too hot?) New "it" street Dresden Drive was always a likely candidate for some new multi-family, given its proximity to MARTA and the popularity of the new retail district there. Well, mega-developer Hines (best known in Atlanta for marquee office buildings) is going to build some apartments there and they're opting for some rather chic architecture. In Atlanta, home of so many lame garden apartments. Huzzah!

Our Sprawl-y Mess of a City— we'd be remiss if we didn't point you toward our friend ATL Urbanist's excellent post on the history of the road building that made our city the traffic-snarled hellscape it is today. The gist: we never learn from our mistakes. Huzzah!

House of the Week— THAT"S RATHER HIDEOUS- there is a house in Buckhead that is very big (like 12,000 square feet) and quite expensive ($2,749,000). But as we all know, stats like that can be a recipe for disaster. Ever wondered what it would look like if someone decorated an already garish mansion with items purloined from a yard sale in Vatican City and a closed-down Dave & Buster's? We can show you.