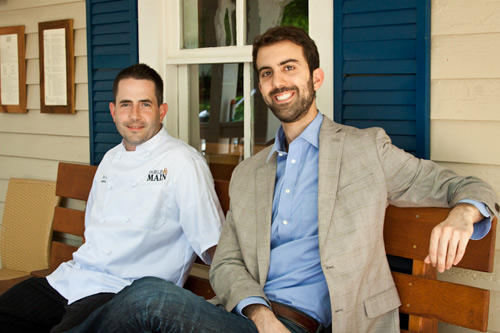 In August 2011, restaurateur Ryan Pernice and Chef Ted Lahey teamed up to open Table & Main, a southern tavern in historic Roswell. Pernice, only 25 at the time, had most recently helped open Maialino, an acclaimed Roman-style restaurant in New York City, but had worked in Roswell kitchens since age 13. Lahey, who was named Eater Atlanta's hottest chef last year, had also worked in Manhattan, at Fiamma Osteria, but more recently made a name for himself at Georgia's Five & Ten, South City Kitchen, Relish and Pricci. The pair wanted to open a neighborhood spot where local ingredients pair with wines and bourbons for a thoroughly comforting evening.

What made you decide to open Table & Main?
RP: I worked at Roasted Garlic (part of the Sugo restaurant family) when I was 13 and ever since then I’ve been attracted to the energy of a restaurant. It’s militant, like being in a cockpit; restaurateurs have to know how to do everything. Back then we would listen to The Band, Bob Dylan’s backup band and the song “The Weight” in particular. It’s about a place a guy could come and really hang out. I wanted a restaurant like that. (We now have a photo of X in the bar.) As for Southern food? I came across Ted and he had the same idea as me—an upscale tavern with a community feel—and he was really good at making Southern food.
TL: Ryan made the decision, I made the choice to go along, because I felt that there was a need for this type of concept in Roswell. I’ve had the thought before, but Ryan delivered the opportunity.

How did opening go?
RP: It actually went pretty smooth, or at least not so crazy. We opening last August with six servers and my parents on standby in case we needed them. We didn’t open the patio right away and limited indoor seating to 58 (from the 72 we have today).
TL: The construction process was fun for me. I loved being able to custom build the kitchen in a way that I knew would work. Actually opening was a ton of fun! There was a lot of buzz building up to the opening, in part because of our location. As people passed by the construction, there were a lot of questions as to what it would become. It was fun for the community to see it come together.

What is the creative process like between the two of you?
RP: There are things I’m good at and being a chef is not one of them. It would’ve been foolish for me to try to tell Ted what to cook. He has full reign over the menu, as long as it fits in with our concept. We keep each other involved (in our sides of the business) out of courtesy. We have enough trust in each other that we can do it that way.
TL: Sometimes Ryan has a general idea, but he’ll leave the specifics to me. There is a lot of respect for the experience that each of us brings to the table.

What was the review process? Were you pleased with the response?
RP: It was too quick, but every restaurateur will tell you that. This restaurant is the size of a shoebox. I can see everyone who comes in. When John Kessler came, he sat at table 207. I can tell you exactly what he had, but I didn’t want to be [hovering] around his table. I trust the people who work here. We still have 92 percent of the same team we started with, and it shows. Kessler called Table & Main an “instant neighborhood classic” and our team earned that quote, and me trusting them helped them to earn that praise. I will have that opening as my first for the rest of my life.
TL: I have been pleased with the reviews we’ve gotten in the press. It seems like some of the major points that Ryan and I wanted to convey have been noted. As for the process, I intend to serve delicious food to every guest, so nothing really changes for the critics.

Do you feel like the majority of critics understand the intent behind Table & Main?
RP: Kessler awarded us two stars, but he said we have a great vibe—he was right on point with his commentary. There were things we needed to work on and we learned from it.

How's business these days?
RP: We’ve been very blessed to have Roswell embrace us so. I always think about Churchill’s quote, “I find the harder I work, the luckier I get,” and how it applies here.
TD: I do feel like the intent has been understood, although I think some reviews have hinted at a desire for more avant garde cooking. I grew up in the south, and my goal has been to refine the classic dishes that I grew up on. I feel like the new south movement has branched out too far from what my granny cooked. My granny never served pickled mustard seeds on anything, and she certainly never turned anything into a foam!

In the last year, Historic Roswell has really made a name for itself in the culinary world. How has this affected Table & Main’s business?
RP: We’ve benefited greatly. I remember when Roswell was mostly antique shops. It helps that I went to high school here since this is really a neighborhood spot. People have a strong attachment to us and we have to work to preserve that.
TD: We’ve been blessed to have built a steady following, and the growth seems to still be happening.

Looking back over the past year, what would you do differently?
RP: I wasn’t the world’s most experienced manager. I want everyone to be happy here and I can’t help but look back on an experience where a staff member didn’t work out and wish I could take back what happened. I beat myself up a lot. Also, I would have asked for more storage space. We’ve gotten very good at ordering exactly what we need and nothing more.
TD: I really can’t think of anything!

How is this restaurant different from any other you've been a part of?
RP: I’ve never worked anywhere with as loyal a staff. This team just gelled well. No one leaves. We also have a bigger group of regulars than any other restaurant I’ve worked at. I attribute this in part to the story people leave with. We have one regular who wanted espresso, and we don’t sell it here. So, I drove to Starbucks and bought her one and served it with her dessert. Another time she said the only thing that could make her meal better was some McDonald’s fries. So we got them for her!
TD: Well, for me it’s different because I am a partner, and this is our first venture. It’s great to have a venue where our experience in the business can help shape the outcome.

Aside from Osteria Mattone (opening in 2013), do you have any other projects in the works?
RP: Whoa! No. I’m still in shock that we’re doing a second restaurant [Osteria Mattone], but everything just fell into place. It’s a new challenge for me. I’ve been working at restaurants my whole life, but building a restaurant organization is something I haven’t done yet.

For more One Year In posts published today across the Eater Universe, head over to Eater National.

Kevin Gillespie Closes His Decatur Restaurant Revival, But Might Reopen It Elsewhere