Meet Chewie, the Bouncer at Ormsby's

Share All sharing options for: Meet Chewie, the Bouncer at Ormsby's

Welcome to our feature The Gatekeepers, in which Eater roams the city meeting the fine ladies and gentlemen that stand between you and some of your favorite tables. 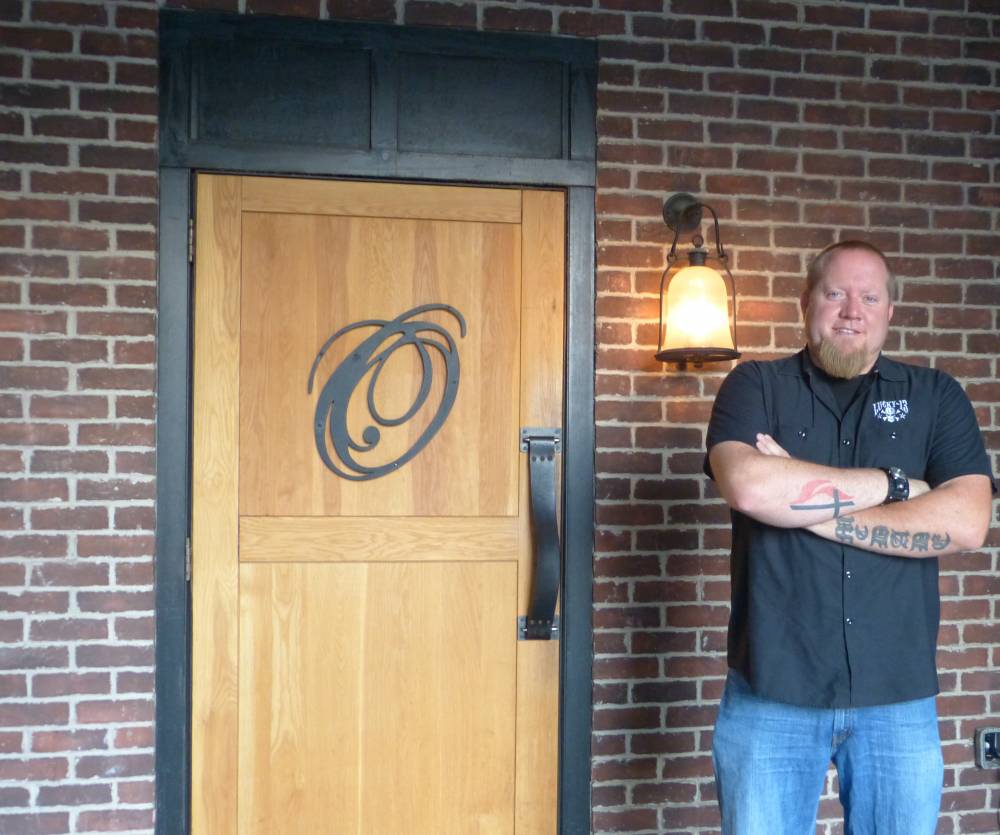 Everyone knows Ormsby's. It's the go-to bar for happy hour, the place to take friends when they come into town and want to see what sets our city apart. With indoor bocce ball, pool, darts, backgammon, and shuffleboard, it's a great place to wind down after a long day at work or to gear up for a night out on the town. It's a given that this bar is one of Atlanta's best spots, but who helps keep it that way? This month, Eater interviews Chewie, the bouncer at Ormsby's, who made us promise not to reveal his real name and who mans the gates of this fine drinking establishment.

What's your background?
I worked as an HVAC mechanic for about sixteen years while also working as a bouncer on the weekends for the last eleven years. When the bottom fell out of the economy a couple of years ago, my bouncing job became my main source of income. In 2001, my sister and a couple friends took me to Buckhead to BAR Atlanta. While we were there, I had about six different girls ask me where the bathroom was. I thought to myself, "Man, I could do this job." I went back the next day and applied. It took about 5 months before a guy named John Sharkey finally gave me a shot. He asked if I had ever worked security in a bar before, and I told him "No, but I’ve seen Roadhouse 43 times." He laughed and hired me on the spot.

Where else have you worked in Atlanta?
I wound up working for the company that owned BAR on their corporate construction team. We traveled all over the country building their new clubs, and, if time allowed, I’d help train their security staff. I’ve bounced for that company everywhere from Chicago to San Diego to Rochester, but then I got tired of the traveling and moved back to Atlanta to be close to my family. Once I got back here, I worked at a hip-hop club in Buckhead, Frequency, for a while, then Wild Wing Café and Cypress St. Pint and Plate— and then came Ormsby’s. Oh, and the boys at RiRa get me to bring in a team to help them out on St. Patrick’s Day.

So how did you end up at Ormsby’s? How long have you been working here?
When I got laid off from the HVAC company I'd been working for, the bar I was bouncing at wasn’t able to come up with anymore shifts to help me make ends meet. A buddy of mine named Matty Gunston had just helped open this new place called Ormsby’s, and he asked me if I would fill in for their door guy on a Saturday night. I said sure. At the end of my shift, [Ormsby's partner] Michael Goot asked if I would like to work for him every Thursday, and I said, "Yes!" After my shift the following Thursday, he told me that he loved my style and if I wanted Fridays, Saturdays, and Thursdays, they were mine. That was two and a half years ago.

Ormsby's is one of the most popular bars in Atlanta. How does that affect your job?
I love the fact that we stay busy. I enjoy seeing all of the faces and getting to speak to all of the people— it makes the nights go by faster. I had an old carpenter on a job site tell me, "The best way to kill time is to work it to death." Occasionally, we wind up with a line outside, and I have to be the bad guy and not let anyone in, but those times are rare.

Do people ever try to bribe you? What's the strangest request or offer you've ever received?
I do occasionally have people try to bribe their way into the bar. It’s usually someone from a group of people that’s had way too much to drink before they even arrive at Ormsby’s, and one or more of them is having a hard time standing up. I always politely tell these groups that, unfortunately, they will not be able to enter this evening and offer to call them a cab if they need one. Occasionally, I get nasty comments, but for the most part they seem to be understanding. Yes, a couple of times they’ve offered to pay their way in. The answer is always "No."

We’ve also got a policy that men who come into the bar have to have sleeves on their shirts: no cut-offs or tank tops. I’ve had a guy offer to buy my shirt from me. As far as requests and offers go, I have a lot of people who want to have their picture taken with the doorman, but that’s about it. You tend to hear so much junk that none of it really sticks.

What do you do when you're faced with people who are clearly underage? Do you take up fakes?
We have a no one under 21 policy after 8 p.m. If we have a couple who comes up with their underage child, I just tell them, "Sorry folks, we’re 21 and up" and explain that they have to get there before the cut off. As far as fake IDs go, there are three kinds to look for: borrowed, altered, or fake. Most of the ones I catch are borrowed from another person. Usually, I can look and tell if it doesn’t belong to them. I ask a couple of questions that aren’t on the ID but can be figured out with half a brain, and if they don’t answer right, the ID goes into my pocket. I also keep up with current IDs from other states and other countries. If I have a person that is obviously over 21 hand me an ID that I’m unfamiliar with, I ask if I may examine it for a minute to know what to look for the next time I see one.

I had a group of students from Georgia Tech come by a while back to try to sell us ad space in a campus publication. While they were waiting for a manager, they told me that Ormsby’s had a reputation on campus as a place that you couldn’t slip into with a fake ID. It made my night! I do still catch a fake here and there. I’m expecting a new crop to come in once school starts back in the next couple of weeks. Every once in a while, I’ll have some kid who will want to argue with me until a police officer shows up, but it’s rare. I usually tell them they can either go home or wait around and get a ticket. I love the APD!

Something Ormsby's is known for is the indoor bocce ball and all of the other games y'all have. Do people get injured a lot? Do they try to steal things?
No, we don’t have a lot of injuries here. We try to keep a pretty good eye on things, and on the rare occasion where someone starts to get rowdy, we are always able to get a handle on things pretty quickly. We had a guy once who was standing 25 feet from the dartboards and was going into his wind-up to start throwing, but we saw what he was up to and explained that it probably wasn’t a very good idea. As far as stealing goes, we get a pretty good crowd of people in here, so we don’t wind up with many things disappearing.

Do you have any outlandish stories? What's the craziest thing someone has done to try to get in— or to get kicked out?
We kicked out a guy last week for being a complete jerk to one of the servers by trying to give him his takeout box and telling him, "Here. Have a meal on me since you obviously can’t afford one yourself." I was standing right there with the manager, who told the guy, "Sorry bud. You aren’t going to talk to my server that way. Chewie, escort this gentleman out."

After I walked the guy outside, he started ranting and raving about how his buddy is a food critic, and how we were going to be sorry. Then he proceeded to tell me that he went to private school and now makes six figures and that I just work the door at a bar. All I could do was laugh and tell him that may be true— but I didn’t get kicked out of the bar for being an asshole. I never could figure out why he started telling me his pedigree. I thought that was only impressive in dogs.

When are you busiest?
We tend to be busiest on Friday and Saturday nights when the weather is bad. If it’s too hot or too cold or raining, we are packed.

Where do you hang out in Atlanta when you're not working?
You know, I don’t go out often. If I do it tends to be with my wife, Jen, and our best friends Dave and Scott. We wind up at RiRa.

Has anyone famous ever come in? Do you treat them differently?
Yeah, we get celebrities. I’ve seen Stacy Dash, people from the Vampire Diaries and Teen Wolf. Last August, the cast from American Reunion came in, and back last spring, I checked Ben Stiller and Vince Vaughn’s IDs. Young Jeezy will pop in every once in a while. I had Lt. Gov. Casey Cagle and Big Boi in on the same night. We try to treat everyone the same.

Most of the celebrities that come in just want to have a good time and not be bothered so we treat them all the same. I did get to sit in Ben Stiller’s $110,000 BMW. He’s such a little guy that it was hard for me to squeeze into it!

At the end of the day, what's the one Gatekeeper tool you need to do your job?
Knowing that the people you work with have your back 100%. The security staff here is the best I’ve ever worked with. Jamey Bray, Jimmy McDade, and Daniel Rivera are some of the most professional guys out there, and I was glad when I could pull us all together to work here at Ormsby’s. The awesome managers and our other staff help make Ormsby’s the place it is. We are just one big family here, and that’s how we try and treat our guests.
· All Previous Coverage of Ormsby's [-EATL-]