Share All sharing options for: Meet the Castellucci Family

Keeping it in the Family is a new series in which Eater interviews families who work together in the restaurants industry. 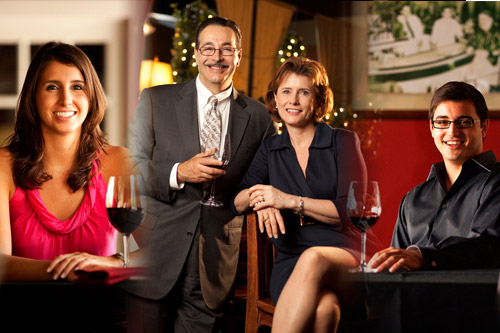 The Castellucci Hospitality Group (Sugo, The Iberian Pig and Double Zero Napoletana) was founded in 2003 in Atlanta, but the Castellucci family's history in the hospitality industry dates back to 1917 when Federico II Castellucci's great grandfather opened an Italian restaurant in Rhode Island. It seems that the restaurant business is in their blood.

Eater checked in with the Castellucci family to find out what it's like to run a true family business, how they separate business from pleasure, and what's next for the Castellucci Hospitality Group.

Federico II was on his way to becoming an attorney when his father's restaurant burned down. He stepped in, rebuilt the business and never turned back. The family moved to Georgia, opened Sugo in John's Creek and then in Duluth, where Nancy is now general manager. But when Federico III returned from Cornell University, where he was preparing to become an investment banker, and saw Sugo Duluth failing, he, too, abandoned his plans in order to save his family restaurant. Once Sugo was back in order, he partnered with college friend Chad Crete to open The Iberian Pig. His sister Stephanie, also home from Cornell, stepped in, taking over the management of Sugo John's Creek, and freeing up Federico to open the family's newest restaurant, Double Zero Napoletana, which Stephanie now manages.

What's it like running a "family business"? How do you think that changes both the way you operate and the resulting quality of your restaurants?
Federico III: The biggest thing is that you have

Federico II, how do you feel about your decision to give up your dream of becoming a lawyer and reopen your father's restaurant after it burned in a fire? Do you ever think about "what if"?
Federico II: No, I don't think about it. I did what I did initially /out of necessity. My parents could not wait for me to become successful as a lawyer. We needed to make money quickly. I later found out that the restaurant business satisfied two basic needs for me: creative independence and the ability to know immediately how I stood with the guest—as opposed to waiting sometimes years in the legal profession to know the ultimate outcome of your efforts. I also feel that I am continuing in my ancestor's footsteps and that the hardships they faced and overcame always gave me the

Nancy, how did you feel getting sucked into the family business? Did you have any prior restaurant experience? How has it changed the course of your life?
Nancy: I worked in my husband's first restaurant in Rhode Island as a part-time bartender when I was 19. After a 7-year engagement, we were married. I think he wanted me to understand that I was also marrying the restaurants. I had a degree in physical therapy and I practiced on and off, but my passion for the people in this business has always led me back. It has been tough at times, but there is no greater satisfaction than seeing my children succeed. We have realized our greatest success as parents.

Federico III and Stephanie, how did your father's path influence your career? If he had become a lawyer, do you think you'd still be in the hospitality business? Why or why not?
Federico III: To be honest, I didn't have any intention of following him. I went to Cornell and had all this restaurant background, but I thought I wanted to do finance and become an investment banker on Wall Street. As I started school, I realized all the hospitality kids were having way more fun with food, wine, and restaurants. It was a wake-up call, and instead of trying to run away from the business, I re-discovered how passionate I was for it. When I graduated, our businesses were on the verge of failure back in 2007. The choice was either abandon my family and get a job in New York or try to save the family business.

Stephanie: I always watched him cooking growing up and how much passion and enthusiasm he has for what he does. I wanted to choose a path where I could wake up everyday and be truly excited to go to work and make a difference. After pretty much growing up in our restaurants, I realized that the hospitality industry really was my passion and that getting excited about food and wine was easy and natural for me. I really have no idea if he had chosen a different path whether I would be in the industry or not. I certainly would not have the same exposure and experience at a young age to the restaurant business. You can never look back and wonder what if. You can't live your life like that. I'm just happy to have a job I love and be able to be surrounded by my family everyday. Not everyone can say that.

How has your family's diverse background influenced your cooking and your restaurants? How often do each of you return to Greece and Italy?
Federico III: There is no doubt that our upbringing has influenced our restaurants; however, not in the way you think. I grew up in a restaurant from the time I was 5. I got my first job outside of the family when I was 11. I cooked in professional kitchens til I was 21. My cooking is a result of my experience in the restaurant business. Now I am lucky to have someone like Chad Crete (chef/partner) who thinks very much on the same level about food, flavors and creativity. We have similar food backgrounds, and work very well together when it comes to concept creation. I am constantly thinking about the big ideas with my head in the sky. He is the one to interpret those ideas and make food magic out of it. When it clicks, it really clicks.

We don't travel as much to Europe as we would like, but one of us makes it almost every year. Unfortunately, there is really no such thing as a family vacation. One or two leave and the rest watch after the restaurants.

Federico III, do you have children? If so, do you think they'll continue in your footsteps? Would you want them to?
Federico III: I do not have any children yet, but I can tell you that I won't force them to go into the restaurant business. They can do whatever they become passionate about. The biggest thing that I worry about is them being spoiled. Stephanie and I grew up in an entrepreneurial family where times could be very tough. We had to work hard and struggle to keep the family business alive at times. There were no summers in the Hamptons or family trips to exotic locations. We all worked, all the time. I hope that I can instill that work ethic in my kids when there isn't that same struggle.

How do you decide when it's time to open a new restaurant or close an existing one? There must be some sentimental value there. How do you separate those nostalgic feelings from the (financial) business of it?
Federico III: This is always a tricky one. If the restaurant isn't performing, you have to make a decision. /You can't be emotional about it. I don't understand how people keep pouring money into restaurants that don't work. We don't open restaurants to just stay in business. We open them to thrive. If a restaurant is just chugging along and not growing, we either re-concept or close, although with the exception of the misguided franchise program, we have never closed any restaurants. We either sell or re-concept. In the case of the Roasted Garlic, we sold. With Sugo, the franchisees decided to take themselves out of the game when they couldn't properly operate the restaurants. It was a great learning experience NOT to be repeated.

Rumor has it you have a new restaurant in the works. Care to share details?
Federico III: There is in fact a new restaurant in the works. We have not yet found the precise home for the restaurant yet, but hopefully something will break soon. We have been very tight lipped about the concept since our last idea for a new concept was very coincidentally announced to be opening in Atlanta relatively soon. Not going to mention any names, but there isn't a whole lot of originality out there. There are some guys like Kevin [Rathbun] and Bob [Amick], but there just isn't a lot. That said, our ideas are constantly being refined and developed for the moment

Yes, Empire State South Is on the Market, but It’s Not Closing