Angry chef and Morningside empire builder Ron Eyester recently received a cease and desist letter from national chain McAlister's Deli. The letter refers to popular breakfast sandwich The Big Nasty, which is on the menu at Eyester's restaurant Rosebud and happens to share a name with a dish on McAlister's menu. The deli's sandwich consists of Black Angus roast beef served open-face on a toasted baguette with gravy and cheddar-jack cheese. Rosebud's version is a breakfast sandwich with buttermilk fried chicken, scrambled egg, smoked bacon, and cheddar.

About the letter, Eyester says in an interview with Eater National:

Our most popular [brunch] item is The Big Nasty. And we just got a cease-and-desist letter from a McAlister's Deli that apparently they have a Big Nasty that's been trademarked. It cracks me up. Really? You're going to try to sue us over a fucking chicken sandwich with scrambled eggs? I was going to actually write them back and see if they would be willing to host a contest where people decided who had the better Big Nasty. We could decide it fair and square by the people.

Got a good name? Leave it in the comments, then check out the letter below and head to National to see the rest of the interview. 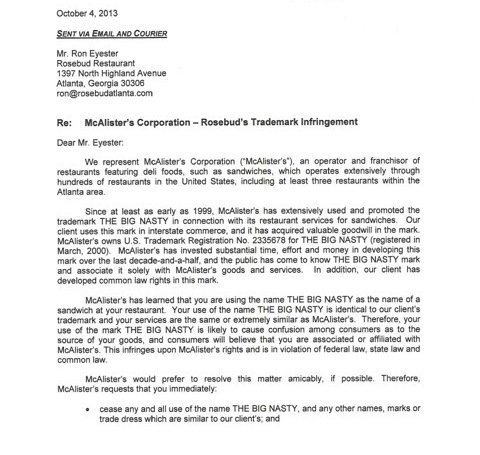