Share All sharing options for: Erin Schopf and Adam Lowe on the Last Decade at Manuel's Tavern

For a special Cocktail Week installment of Lifers, correspondent John Mishler talks Adam Lowe and Erin Schopf, both of whom have been servers at Manuel's Tavern for over a decade. 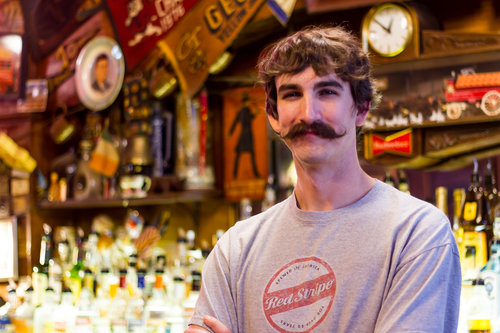 Manuel's Tavern is a place of regulars – regular customers, regular bartenders and staff, regular orders. The bar on North Highland Avenue has been a neighborhood mainstay since 1956. And many of Manuel's employees have been there nearly as long as the place itself, like legendary bartender Bobby Agee. But even Bobby had to start somewhere. Erin Schopf, a fourteen-year veteran at Manuel's, and Adam Lowe, who just reached the ten-year mark, are part of the changing of the guard at Manuel's. Partners on the day shift, the pair represents a new generation of Manuel's bartenders. Erin and Adam might be newcomers by Manuel's standards, but aside from the faces behind the bar, don't expect too much to change.

How did you get started working at Manuel's?
Erin Schopf: My mom worked here. She was kitchen manager for a while, and I grew up around the corner. I came home from college one day, and she was like, "Do you want to run food at Manuel's?" And I was like, "Sure." So, I kind of came in and I never left. For a while I only worked on school breaks. And then I slowly worked my way up as soon as I got out of college and I came back.

Adam Lowe: I moved to town to try to get into theater, and I actually got a job at what was once the Old Spaghetti Factory right down the street. I worked there literally one day, and then I got a call from [Manuel's] where I'd already applied. And that first day [at the Old Spaghetti Factory] was so stupid and awful, I called the guy the next day, and I was like, "I'm sorry, I'm not a good fit." And I came over here, and it's been awesome ever since.

Do you have any crazy or interesting stories from your time here?
ES: Once I had to work a double. I worked brunch, which at the time was 9 to 5, and then I had to switch over to the night shift and work in the back bar. We didn't really have a whole lot going on, and it was probably close to 10:30. I thought, "Perfect. We can shut it down and I can go home, and I'm done with my double." It had been pouring down rain. Next thing you know, this building is old, and it started flooding. My boss at the time was like, "We're just going to close. We can't work under these conditions." As we're cleaning up down back, this guy in a tuxedo comes in, and he's like "Are you guys closing? I have a wedding party of 80 people coming in here right now, and I have no way to tell them to turn around." They all come piling in. They're all wasted because they just came from the wedding. My boss was like, "Are you okay with staying open back here?" And I was like, "Why not? At this point, whatever." So they filled that back bar and we stayed open. We had the whole bar lined up with shot glasses of Grand Marnier and Jägermeister, and they just pounded them. They were standing on the chairs, giving toasts.

AL: This was midday. [A couple came in]. It was a 20-year-old woman and either a 50-year-old or late 30-year-old man who had lived his life wrong. She was hitting on every regular, and he was just getting more and more mad, but he wasn't doing anything, just drinking. We started trying to get them slowly out. She was incoherent, but fighting, and she didn't want to leave. Some of my more burly night crew guys, one in particular, helped me get her out. And she was swinging her bag. In the end, we kept trying to get payment out of them. But there was nothing in her bag. Nothing. They had no money, from the beginning apparently. And I've never seen them again. They owe me $70 though. I remember it was 71 dollars and 45 cents because I made a police report. That was the only time I've ever gone that far. Because usually you're like, you know what, it's worth 30 bucks just to have you gone.

This is a big police bar— not like it used to be when the precinct was right down the street— but a lot of those old guys who used to work there and retired, all those guys still come. In fact, one of those guys, this past weekend, married one of our old waitresses. They met here. I think we've had a lot of weddings come out of work here.

Do you have any advice for someone starting this job?
AL: This job, I feel, is a little bit different from your typical bartending job. We're really laidback. It's honestly probably a lot easier. There's a lot of drinks I've never had to make because I don't work at night and I don't work in an area where the customers expect a lot. I don't have to make anything fancy. I'd advise someone to find a bar like this one.

ES: I'd recommend having a thick skin. You meet all kinds of people doing this– some that feel like they're entitled, and some that feel like you're terrible at what you do, and they don't realize you've got five things going on. Especially behind a bar, because some people expect a show. They want people to song and dance them the whole way through, and a job like this, sorry, we'll bring you your drinks. Adam will have a joke for you, but other than that, we're pretty cut and dry here.

What do you see yourselves doing a few years down the road?
AL: I do comedy entertainment. Kid and adult shows with juggling and stilt walking and stuff like that. That's my other gig. And Erin is an amazing photographer. She does wedding photography, portraits, and all kinds of cool stuff. We both have things that we do that are taking over larger and larger portions of our lives.

What's your favorite part about this place?
ES: The first thing that comes to mind is the fact that it definitely feels like family here. Kitchen staff and wait staff, we just all get along really well. And any new person who comes in, that's the first thing they say; they're like, "This feels like a family. It's kind of weird." Of course with that, there's bickering and there's pouty pants. The normal family stuff.

AL: I love the family feel. We are a giant family. No matter who comes in and who goes out, these are the people you want to hang out with. These are the nicest, friendliest people. I've never, not once, dreaded coming into work.