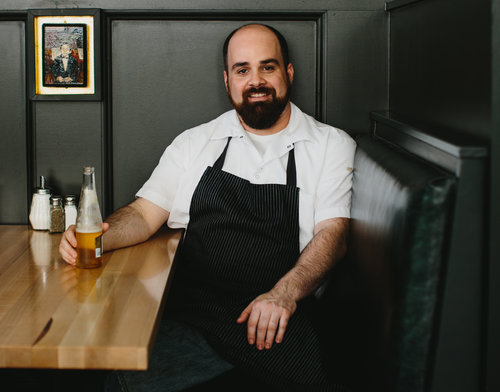 Today we check in with Todd Ginsberg, executive chef at Emory Point's The General Muir. One might say (and many have) that Chef Ginsberg has been at the helm of two seminal moments in Atlanta food culture: 1) At Bocado, he brought us a cult-worthy burger that was available before 10:00 p.m. 2) He left Bocado to bring us The General Muir, a spot that in less than a year has garnered national acclaim as one of the best new restaurants and New York-style Jewish delis in the country. It's got fried chicken on Fridays, its own special, pastrami-laden burger, and a whole lot more. But if you aren't looking for deli-inspired breakfast, brunch, lunch, and dinner, or fried chicken, or that burger, the man serving up all of this has a few suggestions for you here.

Weekend breakfast:
Shopping and eating at Grant Park Farmers Market on Sunday mornings are my preferred way to spend that meal, period. Little Tart is there, Revolution Doughnuts, crepe makers, banh mi, King of Pops, as well as a ton of local farms. H&F Bread Co. is there, as well, for a great baguette to carry under my arm with me back to my house for a cheese snack.

Quickie lunch:
Pretty much every Monday I take my son to Empire State South for a pimento cheese app, a super food plate, and one more entree that I would like for him to try. Sometimes it's octopus, another time it might be pork belly. Always, it's a perfect lunch.

Casual dinner:
Sunday nights I'm often found at Octane in Grant Park where David Sweeney is doing his pop-ups. A master of vegetables. I feel whole and nourished after eating all three of his Sunday offerings. His salads are creative and pop with his distinct flair for using ingredients that a lot of others don't know about, such as flax seeds and coconut vinegar. If you're well-behaved and ask nicely, he will even tell you how to take a simple piece of eggplant and turn it into a disc of caramelized, crisped custard. Insane!

Ethnic restaurant(s):
Hands down, Tasty China! Dried, fried eggplant keeps me amazed, as well as the crispy numbing beef. It's a hike but I am always super satisfied on the drive home.

Late-night snacks and booze:
One Eared Stag. Robert is a genius who cooks for those who enjoy eating. He has his own style, like no other style of food I have eaten before. He did a carrot soup that made me question if I should ever try and do another puree of carrot again. Plenty of beer and bourbon.

Fancy night out:
Cakes & Ale to me has some of the most inspiring food in town. Billy is so confident and simple in his approach— to buy perfect ingredients and listen to what they want him to do to them. Often simply dressed and loved.

Out-of-town fave (regional):
Fig. Nothing pretentious about one of the best restaurants in the Southeast. Each dish is executed so well. Gnocchi stuffed with ricotta are pillows that hover over their accompanying sauce. The soft-shell crab will be the last one I literally will ever have again (I went into anaphylactic shock afterwards), and I am lucky and grateful for it was the best soft-shell crab I have ever had—piccata style over sautéed greens. [Charleston]

Out-of-the-whole-country fave:
L'Astrance in Paris. Pascal Barbot. Elegant, modern, refined, and filled with a small staff who are all perfectionists. Doesn't hurt that's it's a stone's throw from the Eiffel Tower.
· All Go-To Guide Coverage [-EATL-]
· All Todd Ginsberg Coverage [-EATL-]