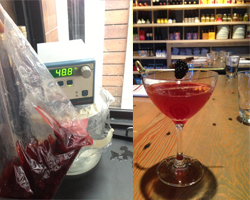 Seven Lamps bartender Arianne Fielder has a new trick up her sleeve: sous vide cocktails. Chefs have been using the technique with food for decades— Atlanta's own Richard Blais even has a "Sous Vide Cooking 101" section in his new book— and now it's come to the city for booze as well.

Inspired by photos of a friend's trip to Hawaii, Fielder went into scientist mode. She hypothesized that slowly cooking the sugars in alcohol but not allowing the vapors to escape would make colors darker and flavors more intense. Her new cocktail, a play on the classic Allegheny, vacillates between complex and approachable with this technique and simple ingredients.

A traditional Allegheny is much like a Manhattan with the inclusion of blackberry brandy and lemon juice. Fielder uses actual blackberries instead of flavored brandy, allowing the fruit to cook and burst while sealed in a vacuum pouch. Heat aids the extraction of flavors and also shortens infusion time.

Her spring cocktail menu premiers on Thursday, March 14, at Buckhead's Seven Lamps and also includes a sous vide margarita. If you head in to check 'em out when Prohibition's Tom McGuire is manning the bar, be sure to get him started on the Whiskey Rebellion of Allegheny County while he stirs.