The Story Behind an Inspiration: Buttermilk Kitchen's Suzanne Vizethann On 'Dad's Waffle'

Share All sharing options for: The Story Behind an Inspiration: Buttermilk Kitchen's Suzanne Vizethann On 'Dad's Waffle'

As a Burger Week special, chef and owner Suzanne Vizethann talks about a Buttermilk Kitchen menu staple that her father has been serving since she was young. Dad's Waffle is a hamburger patty atop a waffle, and here, Vizethann explains how it came to be. 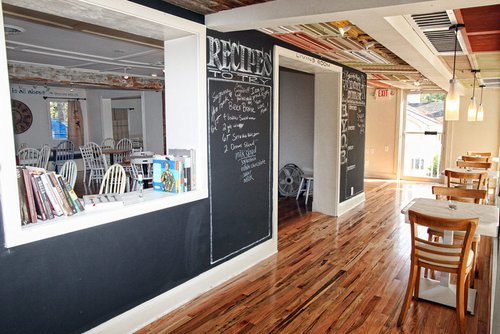 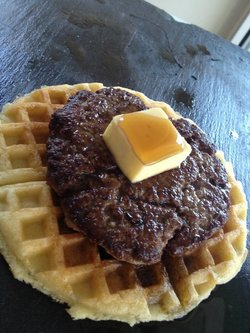 Growing up as Ray Vizethann's daughter afforded me many opportunities to indulge in home-cooked meals inspired by secret recipes handed down from my Italian grandmother. I often tagged along in the kitchen as my Dad prepared his famous pastas, mouth-watering steaks, and delicious tomato platters. Even before organic was hip, my Dad was growing fresh basil and mint to pair with entrees and iced teas.

When I was still very young, the genesis of the 'hamburger on a waffle' transpired. One morning, my Dad awoke looking forward to his traditional breakfast of bacon and waffles, only to discover that all of the bacon had mysteriously vanished from the refrigerator.

While pondering the idea of disrupting his relaxing morning at home and embarking on a dreaded trip to the grocery store, he quickly remembered that he had just purchased a lean beef patty. Typically, he would marinate the burger with Worcestershire sauce, sea salt, and black ground pepper. Then, heat the grill to high, sear the patty to medium-rare perfection, and drop it onto a bun. Armed with a bit of ingenuity, he instead paired the juicy hamburger with the sourdough waffle and finished it off with a dash of syrup. Not only was he pleased with this new breakfast invention, it became his annual Father's Day request.