The Shed's Todd Richards on the End of Slider Night, Fried Chicken, and More

Share All sharing options for: The Shed's Todd Richards on the End of Slider Night, Fried Chicken, and More

It's Slider Power Hour, and first up is burger correspondent Laura Scholz's interview with Todd Richards, executive chef of the Shed at Glenwood. The restaurant's $3 Slider Night is no more, and we have the details. 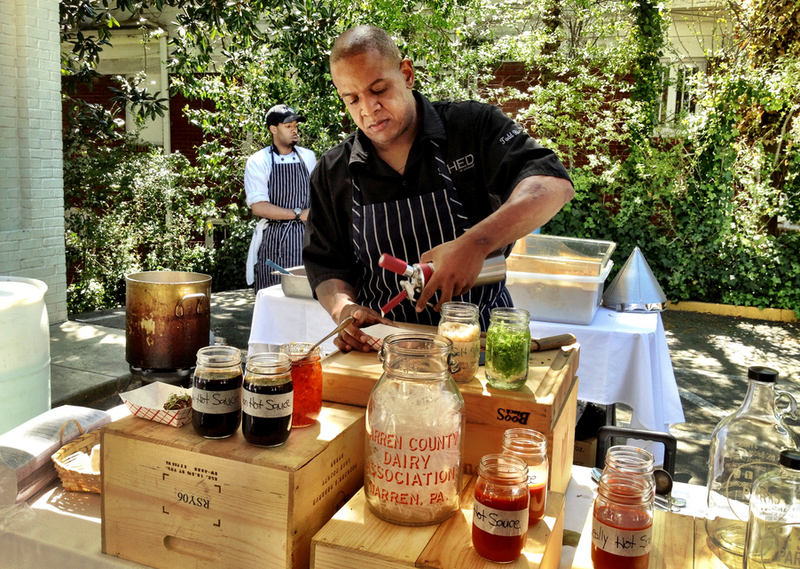 Last night marked the end of an era— the Shed at Glenwood's popular $3 Slider Night is no more. But there's no need to panic, because they'll still be available six days a week during regular business hours, many of them updated from Lance Gummere's original offerings. Executive chef Todd Richards's white truffle chicken salad and fried oyster, okra, and stewed tomato varieties have been particularly popular with customers since he took over the kitchen last summer, and the ingredients and sliders change will continue to reflect seasonal ingredients and Richards's signature style.

Here's what Richards had to say about Slider Night, the brand new Fried Chicken Night, and what's in store for the Shed as it approaches its 5th anniversary.

First, congratulations on your win at the Mother Clucker Festival. That makes two years in a row. Tell us about the winning recipe.
The recipe is actually one I learned when I was a kid from a next door neighbor, and I pretty much haven't changed the way I've done it since. It's the chicken, and a whole mix of secret spices— the Colonel has his seven spices, I have my fifteen, maybe thirty— and it sits in the pot for 24 hours, and then I fry it. And that's about all of the recipe you'll get out of me.

So, Slider Night is over. Why did you decide it was time to move on to something new?
It wasn't so much a decision as just the natural evolution of the restaurant. Fried chicken has become a huge part of that identity. And sliders will still be on the menu every day.

You're replacing sliders with a weekly fried chicken night. Why fried chicken? It seems to be the rage these days.
Well, we started off doing it Friday lunch and Sunday brunch, and we got so many requests for it, we decided that we really should run with it. It's funny how much people like fried chicken in this city. And fried chicken really is one of those universal things, one that every culture has a great take on.

Any plans for a fried chicken slider?
We do sliders every day, so you never know what I might do with them— they aren't going anywhere!
[Ed. note: a bourbon fried chicken slider appeared on the menu last night, so it looks like The Shed is open to combining the new and the old].

What's next for the restaurant?
We just want to continue cooking the best food that we can, with the best ingredients we can.
—Laura Scholz
· All Coverage of the Shed [-EATL-]
· All Burger Week Coverage [-EATL-]
· All Eater Interviews [-EATL-]

The Shed at Glenwood