Share All sharing options for: Charleston's Lee Brothers on Dining in Atlanta

Matt and Ted Lee were in town last week celebrating the release of their new cookbook, the Lee Bros. Charleston Kitchen, at the Optimist in West Midtown. The menu included interpretations of some of the low country chefs' favorite dishes, and the brothers mingled in gracious southern style with each table and had high praise for the restaurant's executive chef, Adam Evans. They'll be back to guest judge the Attack of the Killer Tomato Festival this summer, but here's what they have to say about our city right now. 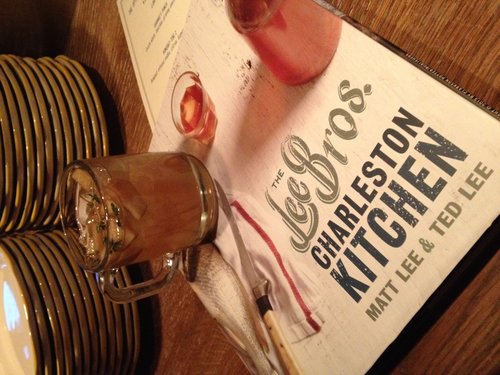 On Evans's gumbo-filled popovers
TL: I have to know how they did this. We're just home cooks. They've taken our shrimp popovers (pg. 57 in the book) to a higher level.

On Atlanta
TL: Atlanta has the most dynamic food scene in the South. Charleston is a magical city with so many great restaurants, but what we don't have is Buford Highway or places like the Buford Highway Farmers Market, where you can get a Russian pickled watermelon. How cool is that?

On West Midtown
ML: This area of restaurants is where we generally eat.
TL: We tend to visit the restaurants of our friends— Miller Union, JCT Kitchen, Abattoir.

On One Eared Stag, which they tried during a filming of Unique Eats
ML: It was awesome.
—Angela Hansberger
· All Coverage of the Optimist [-EATL-]
· All Book Club Coverage [-EATL-]
Lee Bros. cookbook. [Photo: Angela Hansberger]