The Silver Skillet: A Taste of Yesterday Today

Share All sharing options for: The Silver Skillet: A Taste of Yesterday Today

As Greasy Spoons Week continues, correspondent James Oxendine provides a look into the Silver Skillet, one of Atlanta's most iconic diners. 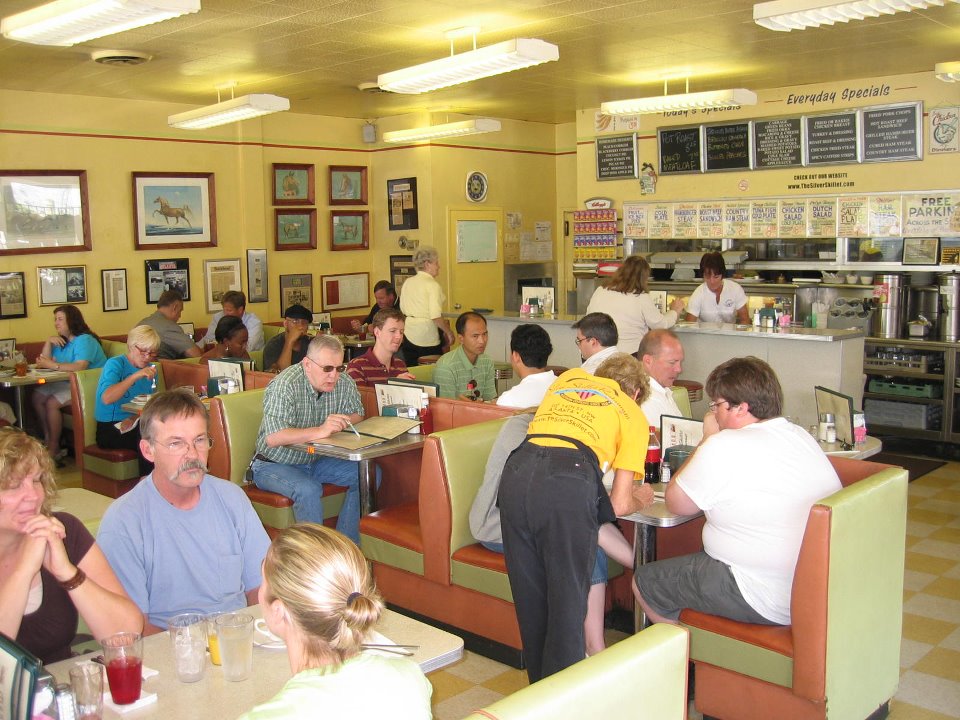 In the world of the classic greasy spoon, the Silver Skillet has been described as Atlanta's benchmark for its quaint quality along with a menu filled with Atlanta favorites like eggs, grits, red-eye gravy and an award-winning lemon icebox pie. Nestled between Westside and Midtown, two of Atlanta's most progressive dining neighborhoods, the historic diner has offered its customers a consistent Southern dining experience for over 56 years.

The venerated spot, located on 14th Street near the Downtown Connector, has been a family-owned and -operated enterprise since it opened in 1956. It was purchased in 1967 by the family of the current owners Teresa Decker Breckenridge and her husband, Jeff. Mrs. Breckenridge, or Teresa as she prefers, has worked in the family business since she was 14 and maintains that the key to Silver Skillet's success is the team's dedication to good service and good food, both provided on a consistent basis.

Because of its decor, the Silver Skillet has been featured in several movies, commercials, videos, and print ads. Teresa has been a guest on morning shows, and in 2009, host Guy Fieri filmed an episode of Food Network's Diners, Drive-Ins and Dives featuring the Atlanta classic. Watch it here:

Although the walls of the lunch and breakfast-only spot are covered with photos of celebrity clientele ranging from former New York Mayor Rudi Giuliani to comedian Dave Chappelle, Teresa says that the Silver Skillet is not a kitschy tourist trap. The diner's diverse customers include downtown office workers, Georgia Tech students, truck drivers, and neighborhood regulars as well as tourists seeking an authentic Atlanta dining experience. And one of the key notes of that experience is the personable wait staff and their longevity. Teresa says jokingly about her employees— one of whom just retired after 45 years on the job— "They just won't go away."

Over the years, Teresa estimates that the restaurant has served several million eggs and, on average, 125 pots of coffee a day. Atlanta's iconic diner has stood the test of time by remaining a constant in an ever changing world, a place where you can feel welcome no matter who you are. As Teresa says it best, "We are just like Cheers."
—James Oxendine
· The Silver Skillet [Official Site]
· The Silver Skillet on Diners, Drive-Ins, and Dives [YouTube]
· All the Silver Skillet Coverage [-EATL-]
· All Greasy Spoons Week Coverage [-EATL-]