Share All sharing options for: The Early Word on Buckhead Newcomer King + Duke

And we're back with Good News/Bad News, a series rounding up the early reviews of a restaurant. Is there one you'd like to see featured? Do let us know in the comments or via the tipline. Feel free to chime in with your own opinions on King + Duke as well. 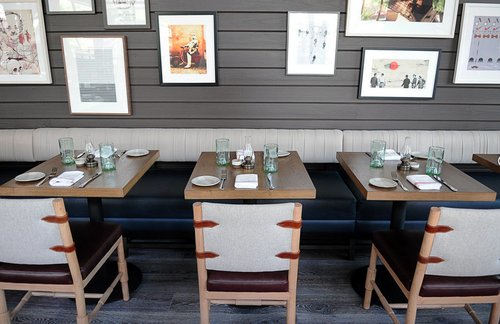 Ford Fry's fourth spot, King + Duke, has only been open for about three months but has already generated a lot of attention. The restaurant is known, of course, for being the fourth Buckhead spot from empire builder Fry, but also for its open fire hearth, which both executive chef/hot chef Joe Schafer and pastry chef Chrysta Poulos take advantage of to grill meat and make s'mores. Early reviews are in; keep reading for the good news and the bad news.

The Faith Redeeming News: This Yelper has new hope for the Atlanta dining scene thanks to King + Duke: "My husband and I had a completely faith redeeming dinner at King + Duke a week ago. Haven't been all that impressed with the way the culinary scene is moving as of late. This place reminded us why Atlanta has become such a food haven! We devoured the lamb belly. It was perfectly seared and the fat rendered. You must have this dish! The ovens here are really something to see. I highly recommend...go & go now!" [Yelp]

The Noisy News: A few recent OpenTable reviewers haven't been thrilled about the noise levels: "Tapas size tables and noise detracted from lovely food;" "We as a party of four,found the area from the bar to the dining area rather restricted. Very loud music and I am deaf in one ear;" "The interior design is beautiful but the place is very noisy. [...] So many new restaurants in Atlanta seem to forget that people go out to eat for the food and for the social interaction. If you can't easily hear the other people at your table, then you lose one of the two most important things about the experience." [OpenTable]

The Best Dish News: This reviewer loves the food, especially the bone marrow: "Far and away, the best dish was the bone marrow. I highly recommend it. I've had bone marrow and a bunch of restaurants in Atlanta, including the Spence and others. This has been the best I have ever tried.The roasted artichokes were also wonderful. I could taste the wood fire grill flavor and the butter that came with it was excellent. The mushrooms were great too. ... Overall a great experience. Service couldn't have been better. Will return." [Yelp]

The Burger News: The burger is all this reviewer wanted it to be : "The food here is made with a lot of love and you can taste it. The sticky chicken wings take 36 hours to get to your table. The artichoke is roasted in the flame...The house burger is made from the trimmings of fine cuts and fat basted while it cooks to your desired temp. It's as satisfying as you want a burger to be. Unadorned in all its glory. [Yelp]

The Engaging News: In Knife & Fork, Christiane Lauterbach gives the restaurant three stars: "Delightful inventions such as a combination of crispy torn potatoes and an herb salad used as garnishes for lamb saddle chops with warm green olives and minted salsa verde have much to do with establishing King + Duke's gourmet reputation...The restaurant does all it can to engage its customers imagination." [Knife & Fork]

The Sandwich News: Review Atlanta raves about the sandwiches. On the roast pork "French dip": "One look at that gorgeous pink color tells you the pork will be tender. And, it was. Perfectly tender and touched with hickory smoke, this was divine." And on the filet o' fish: "This was one beautiful monster of a sandwich. Flakes of smoked haddock and potato are formed into a crispy cake and topped with smoked egg tartar and baby lettuce, this was another winner." [Review Atlanta]

The Vibe News: The Fire House Chef digs the atmosphere: "Think not Disney when imagining the décor, as it's more a retro-modern twist on the imagined home of Mark Twain replete with tall, book covered shelves, a fully stocked bar, and comfortable wood everywhere. It's an amazing vibe. [...] Though a under seasoned finale, slightly overcooked proteins, and overpowering cheese left us wanting more, the undeniably wood driven and open fire roasted fare just won us over. The excellent atmosphere (a true highlight) and wonderful service aided in [making] King + Duke [...] worthy of coming back and seeing what they are up to." [The Fire House Chef]

The Inedible News: Serena Patrick wrote a scathing post in her blog, Hot Dish Review: "I was either given an incredibly dull knife or a terribly tough duck. Prepared in their open hearth, the end piece of the breast was so charred I thought it was a burnt potato. Having ordered it medium, the meat appeared pink but was strangely cooked through, requiring much sawing to cut a single sinewy bite... The crispy leg was even worse than the breast, impervious to my dull knife. I tried to pull it apart with my fingers, finally managing a few disappointing bites... Why didn't I send it back you ask? Our server didn't return for twenty minutes by which time I had simply given up." [Hot Dish Review]

The Perfect News: The Dry Rub blog can't get enough of the onion soup or the burger: "The coal roasted onion soup is the best onion soup I've ever had. Why? It's made with a Flat Tire Pale Ale, Mahon Cheese and Croutons. The smoked bone marrow on the side (a common theme at K+D) made it both unique and delicious. We also had the Candied Lamb Belly which was delicious. Many places make Lamb Belly too dry, but K+D's incarnation was perfect...service was phenomenal. Even better was the burger. It's a 9oz Dry Aged Angus Beef Chuck and the onions were sauteed to perfection. I think it will be a strong "Best Burger in Atlanta" candidate." [Dry Rub]

The Definitely Buckhead News: In My Tummy has a good experience overall but doesn't love the scene: "It's in Buckhead and definitely had a Buckhead vibe to it. If you're not from Atlanta, think tight dresses, high heels, Brooks Brothers and lots of designer everything. Not really our typical scene." [In My Tummy]

The Worthy Replacement News: King + Duke makes the blogger behind Burgers, Barbecue, and Everything Else not miss Nava as much: "We had been huge fans of Nava and even though the menu had become somewhat dated, were still saddened to see it go. But I can say that it's replacement has surpassed it in terms of quality and is living up to the hype." [Burgers, Barbecue and Everything Else]

The Slow and Blackened News: Jenny Turknett of the AJC files a disparaging review that discusses the slow service and the burnt cornbread: One of my three-course dinners at King + Duke took almost three hours... Some of the items, like the pre-meal popovers are made in the smoke boxes above the open hearth. These items were consistently overcooked with an exterior char that overtook the intended flavors. The cornbread, which was extremely unusual and tasted like corn tortillas, also bore the same blackening. [Food and More]

The Winner News: Dishes Delicous says King + Duke has "got winner all over it." She likes the "formidable" wine list, the sundae, and the service. [Dishes Delicious]