New feature OTP Bites will feature the best places to dine and drink in the 'burbs. Got a favorite spot? Do leave a comment or send us a note at atlanta@eater.com. 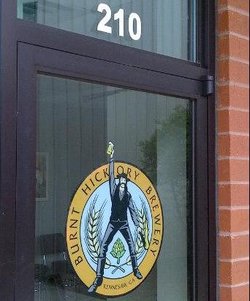 Welcome to OTP Bites, singling out the ultimate food and drink beyond 285. Today, we catch up with Scott Hedeen, owner of Burnt Hickory Brewery in downtown Kennesaw. The brewery was founded in 2011; Hedeen sold his punk rock albums and Nirvana memorabilia to finance it and now has a cult following for his biker-meets-history buff undertones and high-gravity brews. BHB offers $10 throwdowns/tastings/tours on select Saturdays and Wednesdays; check 'em out on Facebook for details. Below, Hedeen talks fan bases, flavor combinations, and more.

So, what's the story behind the name?
Our brewery is named Burnt Hickory Brewery after the road that goes through Kennesaw Mountain— it's the main road that goes through where the battle was, but if you don't know that it's okay. Our IPA is called Cannon Dragger, because there was a Confederate unit that drug cannons up the side of Little Kennesaw Mountain and repelled the Union forces. If you want to, you can look deeper into it and find that meaning, or you can just call it Cannon Dragger. I have a story behind all my beers, but they're not hit-you-over-the-head. To kind of go back to music, it's like, you get what you take from it. We're as in-depth as Led Zepplin but we're as open as Aerosmith.

What influenced your decision to open the brewery?
I feel like I'm the ultimate craft beer nerd. I got turned onto craft beer in the late 80s, and I became a home brewer. At the time I was a TV news cameraman. Then I decided, okay, [I've been a] home brewer for 20 years, and craft beer is really exploding here in Georgia. So I took my home brewery and built it up— started making beer and giving it to my friends. Two years ago, I kind of took a leap of faith, and using my own money, I rented this small building and got my permits. I started making beer on such a small level so that I could control the quality, so that I could put out into the market really good beer in limited quantities. Good beer to try and build a certain fan base.

What kind of fan base?
There is a maturing set of palates and taste buds in Georgia right now. Beer has changed so much in Georgia over the last five years; I'm finding a great audience in people who never thought they'd enjoy an apricot whit until they actually came here and tried it. It's one of those, "Oh my God, I'm gonna hate it," things, and then they drink it and go, "Oh my God, it's really good."

How has the first year been?
We joke all the time— what I've learned in my rookie year— that there's a lot of things they don't show you in the Samuel Adams commercials. You know, they're all smelling hops and sipping beer and toasting, and I'm sitting here going, why is the electric bill 600 frickin' dollars? Turn the lights off guys, help me save some money. I had to go rent port-a-potties. You don't see that in the Samuel Adams commercials.

It really is a business. I look at it as kind of a white collar/blue collar-type job, and it's also a creative arts-type job. It's not like I'm making widgets; I'm making drinkable beer that people read and review.

What can people expect when they come in?
We've done things like apricot whit. We have a graham cracker stout, and a blood orange IPA. We're trying to go at it a little differently.

How do you come up with those combinations?
I just have an affinity for beer. People say, "Why did you decide to put pineapple in a pale ale?" I don't know, I just thought it would work, but I didn't know [how] until we put it in there and saw what it tasted like. I'm not gonna say I'm Willy Wonka. I don't look good in a lavender hat. I'm trying to create a brewery that everyone from the beer geek to the person who just had their first craft beer can really come in and enjoy. Trust my experience and trust my tasting of beers out there. One of our slogans is "Free your mind and your glass will follow" which is based on an old song by Funkadelic, "Free Your Mind.. And Your Ass Will Follow." Try to look at beer differently and you might be surprised what you find.

So what's next for Burnt Hickory Brewery?
I'm going to have maybe two investors try and raise a million dollars. I just hired my first full-time employee, my good friend Will [Avery] out there, we're a very close community here. Most of these are friends and volunteers— like the guys out there pouring the beer are friends of mine and they just get tips. But all they wanna do is drink the beer and enjoy it. We're very low-key. Only because I'm still kind of trying things out—it's like if we're a rock band, we're gigging in our basement trying to make sure we get all our songs out before we go bigger. And you picked a good time to stop by because we're renovating the whole building. And we're gonna knock out some walls.
—Lindsey Weber
· Burnt Hickory Brewery [Official Site]
· All Eater Interviews [-EATL-]
[Beer Geek ATL/Foursquare]