A whole bunch of restaurants are on their way into the Atlanta market. Know of any others? Do send a note through the tipline. 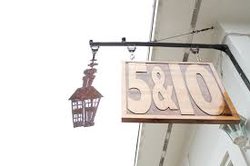 3) Buckhead: A bunch of chains are coming to Buckhead. Look for froyo shop Pinkberry at Lenox Square, Dunkin Donuts near the Lindbergh MARTA station, and True Food Kitchen to start serving at Lenox in June. Chipotle hopes to open in the mall in May. [WNA/TNT]

4) Downtown: UFO-like Polaris will open atop the Hyatt Regency this Spring. The rotating restaurant and bar has a great view and is divided into a bar, a dining room, a "living room," and a "library." Hyatt executive chef Martin Pfefferkorn will helm the kitchen. [Atlanta]

5) More Buckhead: The pizzeria slated for new development Buckhead Atlanta will be called Thirteen Pies. The Dallas-based restaurant group behind it is also putting American F+B in the mixed-use space. [WNA]

6) Midtown: A new Starbucks will open will open at Spring and 4th streets in Midtown, walking distance from Tech Square. It replaces an Arby's. [ABC]