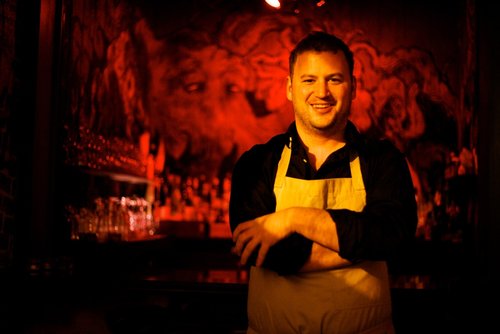 Angus Brown and Nhan Le operate the hottest after-hours chef hangout in the city—Octopus Bar in East Atlanta. Brown returned this spring from a several-month stint cooking across Asia and brought with him new ideas for O Bar as well as a new concept he and Le are opening this spring in Brookwood, Lusca. The restaurant's name derives from a rare (as in, Loch Ness monster rare) Caribbean octopus, and it couldn't be a better metaphor for the ingredient-driven seafood restaurant from some of Atlanta's most adventurous chefs (live prawns steamed with lemongrass and garlic, anyone?).

Brown's combination of pristine ingredients and simple, internationally inspired food is what draws the crowd, including the restaurant industry and anybody else looking to try things that just aren't happening elsewhere (yet). Here's a Go-To from the chef who runs one of the city's favorite go-to's.

Weekend brunch:
After late Friday and Saturday nights at Octopus Bar, my Sunday routine is to start the morning off at Octane with espresso and then go to the Grant Park Farmers Market to eat Hudson Rouse's food at his booth. Hudson's background is farming and he cooks seasonal, market-driven soul food. Everything he uses in his cooking is collected from the vendors from the farmers market and he always makes honest and satisfying food.

Quickie lunch:
Busy Bee is a very special place. So damn good and consistent. I either get the fried chicken (a breast and a thigh) or the fried catfish. Sometimes if I go on Monday I order the meatloaf special.

BBQ joint:
Fox Brothers. The brothers have built an ATL institution. The beef brisket is the real deal.

Late-night snacks and booze:
Kimball House is the kind of place that is exciting as soon as you walk in the door. I like that you can go on a Sunday at 11 and it is jumping off. They have amazing drinks, a solid oyster program, and Phillip and Jeff have creative food coming out of the kitchen.

Top five Atlanta restaurants not mentioned above:
Optimist
BoccaLupo
Bacchanalia
Cakes & Ale
David Sweeney at Octane [Will he be back in 2014?]

Out-of-town fave (regional):
I am really stoked about 5 and 10 in Athens' new executive chef Jason Zygmont. He has a great approach and philosophy on food. He has come up in Atlanta's best kitchens and has also worked at two of the best restaurants in the world, Noma and Per Se. Athens is only about an hour away and Zygmont's food is worth the trip.

Out-of-the-whole-country faves:
Cuc Gach Quan in Saigon, Vietnam. Classic Vietnamese food that is focused with a concentration on technique and ingredients. Owned by an architect and in an amazing old house.

Soujiki Nakahigashi in Kyoto, Japan. Kaiseki style. Life changing and inspiring meal. The chef is in his late 60s and forages for most of the ingredients in the mountains of Kyoto every morning. He has the most interesting individualistic style of food I have ever seen.

Sushi Sawada in Tokyo, Japan. Sushi heads in Japan go back and forth about who is the current king of sushi. I was very lucky while in Japan and I made it to several amazing sushi bars. Sawada was by far my favorite. Mind blowing, really. Husband and wife team only serving six meals a night.
· All Go-To Guide Coverage [-EATL-]
· All Angus Brown Coverage [-EATL-]