Snow Day: These Restaurants Stepped Up to Help Others

Share All sharing options for: Snow Day: These Restaurants Stepped Up to Help Others

Eater Atlanta reader and chef-turned-food writer Lauren Townsend wrote in with her story about the "culinary heroes" of this week's insane winter storm. Have a tale of your own to share? Do leave it in the comments. 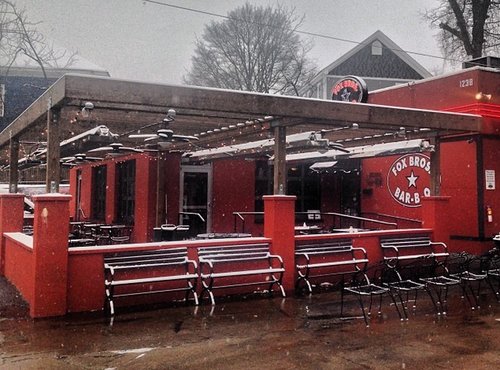 It's no surprise that Atlanta's restaurants and chefs came to the aid of weary commuters, offering safe haven and even rescue. "The word restaurant means 'to restore,' so it was an honor to be able to provide that service to so many people who just needed a warm meal and a good beer," recalls chef Dave Larkworthy of 5 Seasons Brewing Company. "We are lucky to have a staff that [wanted to help], and the skeleton crew was doing a lot of multitasking. We were also lucky that those customers were so generous for the sentiment— many were tipping up to 100% to show their gratitude." The gastro brewpub had every intention of closing at 5 p.m. on Tuesday, January 28, but found it impossible to turn people away, especially at its Alpharetta location, since many of its patrons had been in traffic for up to 12 hours.

Alon's Bakery and Market in Dunwoody also intended to close at 3 p.m. to accommodate school closings for staff members. Holly Nagle was trying to wrap things up when people kept coming in to buy supplies or to stay warm. "We opened the bar for people to buy wine, water, and pre-made sandwiches. People kept thanking us for letting them use the bathroom because they had been stuck in the parking lot for 3 hours." Holly was fortunate to have a place to stay with friends close to the bakery but ended up staying at Alon's to accommodate stranded customers until 9 p.m. "Despite the situation, people were in good spirits and were making friends. It was very communal, and they joked about having a reunion. It is very much what this industry is all about."

Meanwhile, Fox Bros Bar-B-Q executive chef Carey Wise left work early to try and pick up his daughter. Like many Atlantans, he eventually reached home— after 6 hours of gridlock± and was happy to have a warm meal and some peace and quiet. He jumped on the computer and saw numerous postings on his church's Facebook page from people who were in need of help. Carey, a tried and true Southern gentleman with a lifted 4x4 SUV with mud tires, set out to the rescue. "I decided I didn't want to venture outside of a 3-mile radius and set out to start looking for people. I took some people who were stranded at the church back to their homes and would check cars and school buses on my way back." He went out a total of six times before returning home just before midnight. "It was actually kind of fun in a weird redneck way."

It is impossible to fully estimate the financial impact the storm had on Atlanta, but this storm will cost restaurants and bars thousands of dollars in lost sales, labor, and more. Look for specials and promotions help these local heroes recover when they tried to restore.
—Lauren Townsend
· All Snow Day Coverage [-EATL-]
· What Did Atlanta Chefs Cook at Home During the Snowpocalypse? [Atlanta]
· Chick-fil-A Workers Offer Free Food, Shelter to Others Stranded [ABC]