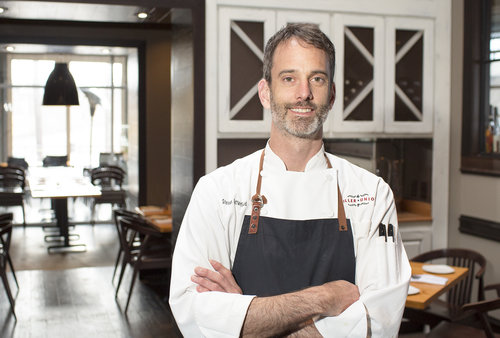 In November 2009, Steven Satterfield and Neal McCarthy opened on the Westside what would become one of Atlanta's favorite farm-to-table restaurants, Miller Union. Since then, it's received local and national acclaim and become a destination for anybody who cares about ethically produced and thoughtfully prepared food. Chef Satterfield comes from an arts background (architecture program at Georgia Tech and rocking the guitar for his band, Seely), but in between gigs he found cooking and landed at Floataway Café then Watershed before opening Miller Union; he also became an advocate for groups like Slow Food Atlanta, Georgia Organics, and the Southern Foodways Alliance. Next January, he'll publish his debut cookbook, Root to Leaf, focused on veggies (naturally). Satterfield took a break to let us in on his go-to spots for good food in Atlanta and elsewhere.

Weekend brunchfast:
Saturday: Ria's Bluebird. Ria's is an Atlanta mainstay with simple, well-made breakfast. It was sad to lose her in 2013, which is all the more reason to support this little gem that keeps on going.
Sunday: Cakes & Ale (just opened for brunch). Have not been yet, but it is number one on my bucket list

Quickie lunch:
Taqueria del Sol. Inexpensive and satisfying, this taqueria is impressively consistent, and everything is really good. My go-to is a carnita with a side of turnip greens.

Casual dinner:
BoccaLupo. Within walking distance of my house. Bruce Logue is inventive, creative, and has fun with Italian food.

Ethnic restaurant(s):
Cardamom Hill. Asha Gomez is the queen of exotic deliciousness. I am addicted to her food— I'm pretty sure that there is crack in it.

Late-night snacks and booze:
Octopus Bar. Nhan and Angus keep it interesting and fun and it's always a little rowdy, which I like.

Out-of-town fave (regional):
Fig or McCrady's (Charleston). It's a tie and I love both. Very different experiences, but equally amazing food.

Out-of-the-whole-country fave:
I'm going to San Sebastián in September and look forward to eating my way around this fascinating region of Spain.
· All Go-To Guide Coverage [-EATL-]
· All Steven Satterfield Coverage [-EATL-]