Jeffrey Gardner on OTP vs. ITP, Neighborhood Dining, and Taking Over at Common Quarter

Share All sharing options for: Jeffrey Gardner on OTP vs. ITP, Neighborhood Dining, and Taking Over at Common Quarter 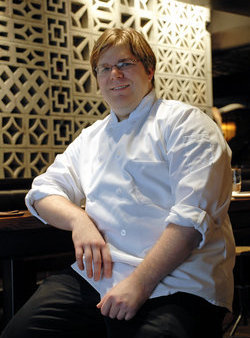 Late last year, Jeffrey Gardner took the helm at East Cobb restaurant Common Quarter, the latest concept from the Muss & Turner's/Local Three guys. Having worked as sous chef in previous posts at South City Kitchen and Alma Cocina, this is the Natchez, Mississippi native's first role as an executive chef, stepping up to the big league in taking over the role. With a broad culinary resume and even a final round appearance on Food Network's Chopped, we caught up with the chef to talk first day jitters leading culinary direction at the restaurant group's new baby, ITP versus OTP diners, and his first memorable meal.

What first drew you to the cooking arena?
For as long as I can remember, I've always been drawn to food. I spent a lot of time with my grandparents growing up, and they were frequently watching cooking shows, dining out in great restaurants, and cooking at home. It felt natural to join them in the kitchen, and I was a very eager assistant. My first memorable meal was at the original Emeril's in New Orleans when I was 14 years old. It was the first time I ever tried rack of lamb, and the first time I had ever seen a soufflé. My first bite was this oyster stew that completely blew me away and my homage to that dish is currently on our menu.

How did you end up at Common Quarter?
I was a regular at Muss & Turner's for years, and had previously worked with some of their cooks at other restaurants, so I was well-acquainted with many of the people in the family. When I saw how they rallied the Atlanta restaurant community for the first Team Hidi event, I was amazed that one group could facilitate that much impact over something so real and genuine. Hearing about people in our industry who organized a transcendental event was so moving, I knew I had to work with them. In March of 2013, I reached out to Ryan Turner about potential opportunities to work together and it turns out that my timing was impeccable, as they had just signed the lease for what would become Common Quarter.

You've got authentic Mexican at Alma Cocina and southern at South City Kitchen on your culinary resume. Where do you think that fits in Southern coastal theme going on at Common Quarter?
I feel like the food I'm doing at Common Quarter is a natural evolution from what we were cooking at South City Kitchen during my time there. I've lived all over the South, so it's easy to pull influences from Louisiana, Mississippi, Georgia, and the Carolinas. My time at Alma Cocina definitely broadened my culinary horizons and I've put a little of that into the menu, such as our bay scallop ceviche. I personally love Mexican-inspired dishes for brunch (chilaquiles have long been a favorite), so I don't think those would be out of place. To borrow a quote from Chris Hall, "You can't argue with delicious."

What differences do you see in ITP and OTP diners and food scenes?
I believe that OTP diners connect more with restaurants that feel like part of the neighborhood, rather than a destination. That's not to say that OTP restaurants can't be both. ITP offers a higher concentration of businesses, hotels, and an arts and entertainment scene, and I suppose that diversity can support a wider variety of cuisines and price points. One of the drawbacks to suburban sprawl is that when major developers create new businesses to meet the needs of newly-built subdivisions, it's often the major restaurant chains that can afford early placement. As time is at a premium, people are inclined to eat close to home, so driving 30-40 minutes into town for dinner can be a challenging. But, I also feel that the landscape is changing with places like Table & Main, The Butcher The Baker, and Seed proving that OTP diners are supportive of unique and locally-owned restaurants. I love the challenge of crafting a cuisine that fits in East Cobb but that wouldn't be out of place ITP, and I'm glad Common Quarter will provide another option.

What was it like taking the helm at Common Quarter?
I'm still humbled that the partners had enough faith in me to let me have the keys to the car, so to speak, and it's been a blast collaborating with such passionate restaurant minds. They've been amazing to let me put my own stamp on the cuisine, while making sure that everything I do fits within our company's culture and overall concept.

You've been there for a few months now. What kinds of changes are coming to the food program?
I'm working to make sure the menu is a good fit for the neighborhood. It's our vision to be a place where our guests can come in during the weeknights and get a great meal at a good value, and not just be considered a fun place to go on the weekends. No boundaries, just delicious! I'm excited that we just added multiple varieties of raw oysters to the menu— we'll also be offering a happy hour of sorts, featuring $1 oysters from 5 p.m. to 7 p.m. We recently launched Low Country shrimp boils on Monday nights as well as Sunday Supper, both of which are three courses priced at under $25. Our brunch menu has received such positive feedback that we're going to start offering it Thursday through Sunday. And of course, spring produce is on the horizon.

Any final thoughts?
We're excited to be part of the neighborhood in East Cobb. I'd like to invite everyone to come join us, sit deep, and let us provide a fun and unique experience.
—Chris Watkins
· All Common Quarter Coverage [-EATL-]
· All Eater Interviews [-EATL-]