Share All sharing options for: Wine Talk with Michael Kunz from Murphy's

Welcome to The OenoFiles, where we chat with the smartest sippers of wine in the ATL. This month, we talk to Michael Kunz of Murphy's. 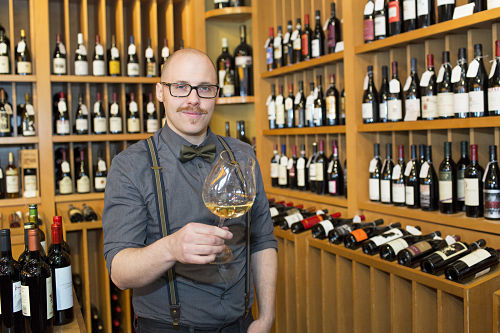 As anyone who's waited for a coveted Murphy's brunch table inside the Virginia-Highland mainstay knows, the wine shop is no joke. Like Murphy's beverage list itself, the boutique operation has on offer wines for every budget and taste. At the helm is Michael Kunz, who co-runs the shop with Bob McKechnie. While Leslie Johnson runs the beverage program for the restaurant, Michael and Bob curate the list of 325 wine labels and manage special orders in the retail outpost. Michael has been immersed in the wine world since his senior year at DePaul University in Chicago, where he took a wine class followed by years of hounding wine consultants for info. After moving from amateur enthusiast to professional in the Chicago restaurant business, Michael relocated to Atlanta and worked in fine dining, then as wine consultant for the much-missed Pearson's Wine of Atlanta. He's been at Murphy's Wine Shop since 2011, educating customers through tastings, e-newsletters, and general good cheer. One thing you won't learn in Michael's wine musings below? He also produces and performs music as part of a duo called Romeo Spike (who says oenophiles are stuffy?).

How long have you been at Murphy's and what led you to take on the wine consultant role there?
Just shy of my three-year anniversary. I was working at a huge, slowly sinking wine retailer [Pearson's] in Buckhead when I met Tom Murphy one day. He overheard me sending a customer to another store for a wine I didn't have in stock, and thought it was a pretty strange way to sell wine. Who wouldn't want to hire the guy sending customers away, right!?

Where do you begin when pairing wine with food?
I think the best pair is a wine you like! If you seriously only like giant, face-melting Napa Cabernet then you should probably just pair that with everything. If you're up for diversity then you can certainly go for "like with like" – big, fatty meats with big, tannic reds, or lighter, less tannic reds with lighter meats, fowl, or oily fish. Would you squeeze a lemon over the dish? Then go for a high-acid, citrus-driven white. Earthy food with earthy wine, etc. But you can also go with contrasts like a high acid Riesling with a fatty steak – the acid will cut the fat, and keep things light while finishing clean. I think it's great to experiment and see what works and what doesn't. You might be surprised. Oh, and Champagne with great potato chips is a must, and be sure to pop a Chardonnay next time you eat fried chicken.

Are there any ingredients that pose a particular challenge?
Spice. Heat spice. Especially spicy meat. Most folks like red wines with their red meats, but tannin and spicy pepper really battle it out. Juicy, less tannic reds like Montepulciano d'Abruzzo can work pretty well. Or maybe you're just better off going for a dark beer!

What's your favorite bottle on the Murphy's list and why?
Our beverage director Leslie Johnson has done a great job with the restaurant's list, so this is tough, but I'd go for either the '96 Domaine Dujac Chambolle-Musigny (I love the delicate nature of mature red Burgundy) or for a white (the Martray Corton-Charlemagne is probably some Platonian ideal of what Chardonnay can be). I obviously like Burgundy a lot, but there's a ton of great stuff on the list.

Can you name the most strange/funny wine question you've ever received from a diner?
Mostly just butchered pronunciations, which is totally understandable, and something I will never judge you for. Although most folks know by now that Cabernet Sauvignon isn't pronounced "Kabbernett Sovignon" with the t's and g's, I've heard it on more than a few occasions!

Have you ever had any celebrity guests who were surprise oenophiles?
I think all celebrities end up as oenophiles – expensive wine is usually delicious! I caught a very dressed down Ben Affleck trying to discreetly eye some top shelf Bordeaux once. He was nice, but definitely didn't want any help!

Have you noticed a recent trend in diners' wine selections, whether it's a certain varietal, price point, or producer?
I've been hearing a lot more people interested in unoaked or less-oaked Chardonnay. And the mass perception of rosé has really moved from associating it with sweet white zinfandel to thinking of it more as an interesting, dry wine. I wish I could get more people to take Riesling seriously, though.

Do you remember the most expensive bottle you've ever sold?
There was a nearly $2,000 price tag on a magnum of Pingus Ribera Del Duero I sold a few years back. My partner in the shop, Bob McKechnie, sold a $2,000 6L of Shafer Hillside Select last year.

Where do you think wine trends are heading next?
People seem to be a little more open to adventure these days, and that will continue as importers seek out untapped regions for the market. I don't think Txakolina [slightly sparkling, very dry white wine] (from Spain's Basque region) will ever be part of casual wine conversation, but there's a lot of people willing to try and enjoy wines they've never heard of. Napa Cabs are shrinking in size and power as the focus shifts a little more towards purity and elegance. And American Merlot is coming back! That movie Sideways wrecked Merlot, but many producers are taking their Merlot pretty seriously and people are re-recognizing it as one of the great noble grape varietals. I think the artisanal-driven trend will continue with food, beer, and wine which will lead to even more small, and even urban, domestic wineries like Portland's Division Cellars being available in Georgia in very limited supply.

How do you recommend that a beginner start learning wine?
Start by paying attention to what you drink. You don't need to pick out all the fruits like you're trying to write a wine review, but notice what you like and what you don't like. Is it big and does it have an intense mouth-feel? Is it spicy? Does it smell like wet gravel? Do the tannins dry out your tongue like over-steeped tea? Does it taste like flat Cherry Coke or smell like a bag of Cheetos? This will help you get used to what you like or don't like. Then spend some time with a wine consultant (preferably in Murphy's Wine Shop, of course) and talk about those likes. We can help by offering things similar to what you like, and help you expand your options. Once you've got a hang for it, I recommend picking a region, reading about its history and wines, and then trying a bunch of different wines from that area. That can really help immerse you in a region and varietals and help you get a deeper understanding of the region, the culture, the history, and the wines. Also, join my email list and go to tastings!

How about collecting?
Diversify! I know a lot of people who only liked really juicy Napa Cabs when they started collecting only to find that five years later they like completely different wines. If you start by diversifying early you guarantee yourself a broad range of well-aged options down the road, no matter where your tastes are in the future. Also, the whole point of collecting is to actually let the wines age to their optimum potential, so you need to have something around the house for Tuesday night pizza, that way you're not always popping the good stuff that really wants to age. I like breaking it down into three categories: 1) Wines for everyday drinking 2) Wines for mid-range cellaring (three to eight years), and 3) Long-term collectables (eight years plus). For every 12 bottle case you may want seven bottles for immediate consumption, three bottles for mid-range cellaring, and two high-end bottles to really put down. That should give you enough for now and enough for later!

Do you have a fave budget-friendly bottle?
We sell a great value Prosecco from producer Ca'Furlan that sells for just over $10 (case price) and is tough to beat at that price category. We also have a phenomenal 2010 Cotes du Rhone from Xavier that is under $14 and drinks like a champ!

For folks at home, do you have an all-time favorite wine and cheese pairing? How about a suggested wine and cheese party set-up?
For dessert I think blue cheese with a Pedro-Ximenz Sherry is absolutely dynamite. PX Sherry is almost like a maple/fig spread with nuts all in one and really tames the sharp richness of blue cheeses. I think wine and cheese party set-ups should offer a good variety of styles and a wine for each (then you can mix and match for fun!).
- Blue cheese (with Sauternes or Pedro-Ximenez Sherry)
- Goat cheese (with a Sauvignon Blanc or a Spanish Godello)
- A sheep's milk cheese, like Manchego (with a Tempranillo from Northern Spain – i.e. Ribera del Duero or Rioja)
- A creamy cow's milk cheese like Brie (something higher in acid like Champagne or a Chardonnay)
- A sharp cheddar may sound a little pedestrian, but they're delicious! (pull out a big Napa Cabernet)

What's your favorite beverage to drink when you're not sampling wines?
Cocktails! I love a well-crafted cocktail. Wine is an amazing marriage of farming, winemaking, history, and geography, but modern craft cocktails are one-of-a-kind creations from the mind of a mixologist that can be absolutely fascinating.

What's your number one wine-rule to live by?
Don't let anyone tell you what you should like. And it's ultimately just expensive grape juice, but it can be magical!
· All The OenoFiles Coverage [-EATL-]
· All Murphy's Coverage [-EATL-]