Ladybird Grove & Mess Hall to Open Along the BeltLine

Share All sharing options for: Ladybird Grove & Mess Hall to Open Along the BeltLine

A new "spacious, outdoor-centric restaurant and drinks spot" called Ladybird Grove & Mess Hall will open along the BeltLine at mile marker 9.25, across from Kevin Rathbun Steak, as early as this summer. Apparently, the chef has been selected but not yet revealed; do send any guesses through the tipline or leave 'em in the comments.

The restaurant, owned by Michael Lennox, will have "2,000 square-foot, Beltline-fronting patio complete with beer garden-style tables, plenty of foliage, and games like shuffleboard and pingpong." In addition, find a dozen local beers on draft and 30 or 40 more craft beers in bottles and cans, draft wine by the jug, and craft cocktails. Ladybird's name comes from former first lady Lady Bird Johnson, who reportedly had a fondness for the outdoors. The restaurant is billed as a "base camp for the urban explorer," and construction should wrap by mid-June. See more pictures on Curbed.

Here, check out this menu template designed by Juliana Lynch, who calls Ladybird a "Wes Anderson meets Bear Grylls restaurant [that] cooks up elevated camping favorites along with farm-to-table local deliciousness." This template offers fun placeholder dishes like "a large piece of meat" and "different kind of meat" which will not, of course, actually appear on the finalized menu. 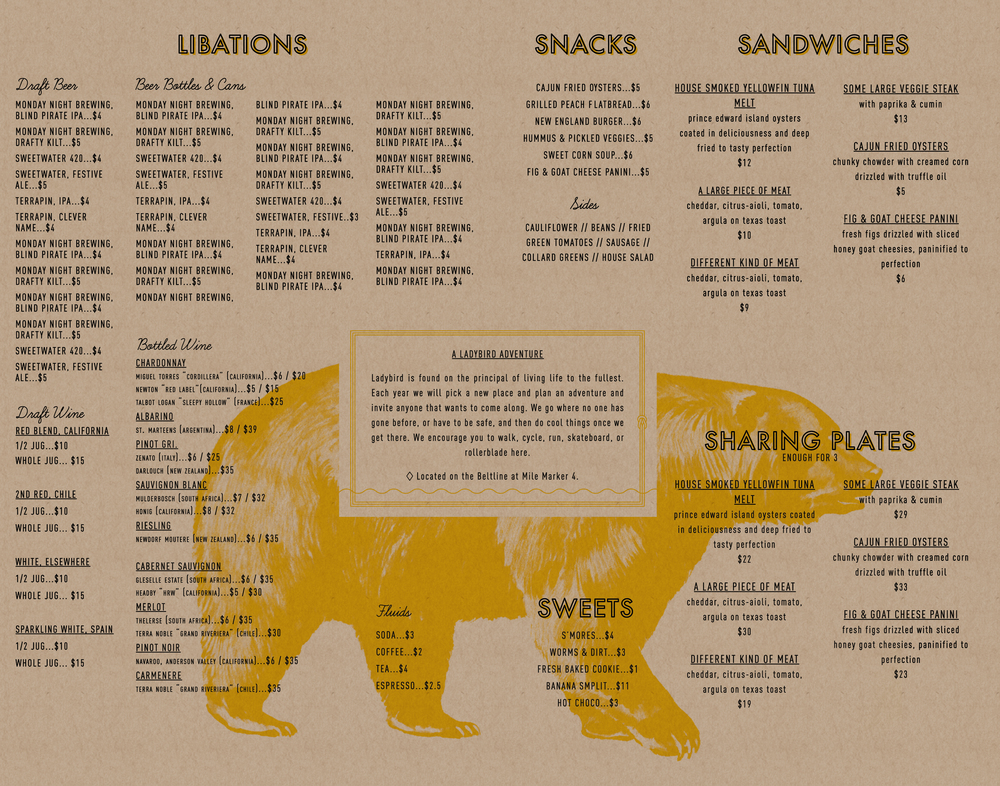 Got the scoop? Do send intel on the chef and more to atlanta@eater.com.
· Introducing Ladybird, the BeltLine's Latest Boozy Bastion [-CATL-]
· All Coming Attractions [-EATL-]

A High-Tech Indoor Mini Golf Bar Is Headed to Dunwoody

With a New Owner and Name, Virginia-Highland Is Still Getting a Neighborhood Pizzeria