Share All sharing options for: More on The Pig & The Pearl in Atlantic Station and Todd Ginsberg's Krog Street Market Restaurants

A whole bunch of restaurants will open in Atlanta this year. Got intel on something coming soon near you? Send it through the tipline. 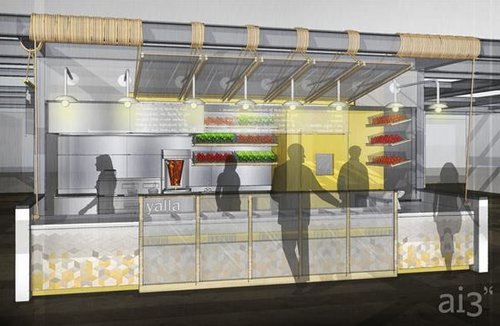 1) Atlantic Station: This new smokehouse and raw bar from the team behind The Shed at Glenwood, The Pig & The Pearl, will open in early July. Chef Todd Richards talks here about coming up with the concept, opening in Atlantic Station, and restaurant culture. He also drops a few menu items: smoked duck, baked beans made with lady peas and local celery, smoked catfish salad, and pork belly with kimchi. 1380 Atlantic Drive, Suite 14180.

2) Krog Street Market: Chef Todd Ginsberg and partners will bring two restaurants to Inman Park this year. Fred's Meat & Bread, a sandwich counter, and Israeli restaurant Yalla. The menu at Fred's offers up a selection of sandwiches, some of which— the double stack burger, the cauliflower and eggplant banh mi, the pastrami— will look familiar to diners who visit Ginsberg at his restaurant The General Muir or remember his time at Bocado. Another rendering here. 99 Krog Street .
· Sneak Peek: The Pig & The Pearl [Atlantic Station]
· Renderings, Sample Menu for Fred's Meat & Bread [Covered Dish]
· All Summer Tracking [-EATL-]